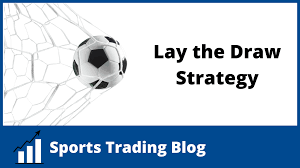 Laying the draw back has gained popularity since the early 2000s and is one of the few regular strategies that the majority of Betfair traders have utilized at some point.

In this article, we’ll examine what the strategy “lay the draw” means, which games are most suited for this strategy, and how to modify our approach to minimize risk.

Lay the Draw Tips: What Is It?

In order to lay the draw, one must use a betting exchange rather than a conventional bookmaker. For this tactic to work, it is crucial to comprehend a “lay” bet.

When you place a lay bet, you take over the role of the bookmaker.

Although there are a few other betting exchanges out there, such as Smarkets, which do offer decent liquidity, we advise utilizing Betfair as your trading platform.

As you can see, more money has been transacted on Smarkets than on Betfair for the upcoming West Ham vs. Tottenham game. There are still three days until the game, so things could alter on game day.

The lay odds are shown on Betfair next to the back odds and are highlighted in red. The best odds are shown in the middle column, and they are accompanied by the maximum staking amount that is permitted.

When you utilize the lay the draw strategy, you are placing a wager that the draw won’t happen. This indicates that if the result is anything other than a draw, you will win your wager (for football, either of the two teams winning).

Laying the draw will be examined as a trading tactic. As traders, we constantly seek to reduce our risk as much as we can and take assured profits whenever we can.

Draw the line. Being able to trade out of your position for a profit when one team scores is the essence of trading.

This works in a few distinct circumstances, and it doesn’t work in others. As a result, we need to be careful when selecting the games.

Tips For Picking the Right Games

There are many different instances in which you can benefit from lay the draw tips, as you will discover as you gain more experience with this strategy.

We’ll start by going through some of the simplest and most popular techniques. We continue to seek out matches with high liquidity. This indicates that there is a lot of money moving around the market, decreasing the risk that your wager will not be accepted. Because we use Betfair, we can typically anticipate reasonable liquidity for football games, particularly in the Premier League.

The most frequent games to watch are those that ought to be high-scoring battles. Laying the draw strategy requires a goal from one team. Look for matches where the offensive, expansive style of play is typically preferred by both clubs.

A lot of people will pick a matchup in which one side is greatly favored, such as the league leaders playing an underdog from the bottom of the league table, and will think that team will win and score at some point.

These contests, though, can occasionally be low-scoring affairs in which the underdog merely parks the bus for the full 90 minutes. If neither team scores as a result, you face the danger of losing your wager before you have a chance to trade out.

The games you want to search for are typically those between evenly matched sides who both like to score a lot of goals.

The odds for a draw will rise as soon as one of the teams scores, and you should be able to get out of your position by backing a draw at a better price.

We can employ our technique once we have located a match that satisfies all of our requirements. Never be greedy and attempt to use it with any available match. Only chances that are in their best interests should be pursued, a prudent trader realizes.

To illustrate, let’s utilize the forthcoming match between Manchester City and Chelsea. Although slightly elevated, the chances of a draw are still within acceptable bounds.

In the Draw row, we choose the lay option. The greatest odds we can currently find are 5.3, so we offer a £10 stake, resulting in a total liability of £43.00 if we lose our wager.

The likelihood of a draw should drop if either team scores. By supporting the draw at a higher price, we can now assure a profit and exit our position.

Man City are huge favorites to win this game, which is a problem. Early in the game, if Chelsea scores first, the chances for a draw may actually go down as bettors anticipate a goal from Man City to tie the score.

When arranging the draw, there are a few circumstances we try to avoid.

As we previously stated, we typically wait for one team to score in order to reduce the likelihood of a draw and exit our position at a profit.

When the underdog team scores first early in the game while one team is strongly favored, this fails. Given that the favorite club would likely score at some point and tie things up, the chances of a draw may even rise in this scenario.

We will attempt to prevent this since it eliminates our ability to trade out for a profit. This issue can be resolved in a number of ways.

First, one easy method to deal with this problem is to stay away from games where one team is clearly favored. The majority of traders often search for games where the odds for a draw are between 3.5 and 5.0, while various traders have varied tastes.

It is typically wise to stay away from the game if the odds for a draw are less than 3.5. Finding a more dependable game is preferable because the risk of loss outweighs the reward of potential gain.

There are still a few solutions available if you find yourself in a situation where the underdog has scored first and you are unable to exit out for a profit.

Every game is unique, thus you must rely on your prior play to choose the optimal strategy. As traders, we must be willing to take our losses when they occur while making every effort to limit them.

The wisest course of action is typically to leave your position as soon as the underdog wins. Even if you lose half of your bet, it’s still better than losing it all.

Every game should be enjoyed as it is. You might hold onto your position and hope that the favorite scores twice in the remaining minutes of the game if the underdog scores extremely early on against the flow of play.

You can also maintain your position and hope the underdog wins the game if they are playing much better football and appear to be on the verge of scoring once more.

Another, riskier strategy is to bet against the favorite if they score first. You are essentially increasing your bet in this scenario on the favorite scoring next.

Before implementing this kind of approach, it is best to get some experience laying the draw because you are increasing your liability.

The fact that occasionally neither team scores for the most of the game is another problem with betting on the draw. To be able to leave your position for a profit, you depend on one team scoring.

It is typically excellent practice to leave your position early and accept a minimized defeat if it appears that the game will end in a goalless draw.

Once more, you should evaluate each game as it happens. However, you should probably sell your position if it has been 75 minutes and neither team has scored. The majority of the time, this will cause you to lose your stake by about 50%. (which is better than a 100 percent loss).

You can continue to watch the game and hope that one team scores, but a wise trader understands when to stop losing money.

You should establish a guideline to leave at a specific hour when you first start out (such as 75 minutes into the game).

If you believe it is likely that one team will win, you might start to play with remaining in the game longer as you acquire experience.

Picture showing how to lay the draw

It makes sense that there will be more opportunities to profit from a sport if more bets are placed on it. It merely requires planning out your approach.

Trading Methodology | Traderline: Lay the Draw. Lay the Draw Technique Technique: This method entails putting a LAY wager at odds of up to €2 on a draw. As soon as a goal is scored during the game, use the Trade button to profitably close the position. You can assume that you lost if there isn’t a goal scored.

A betting strategy known as “back-to-lay” involves placing a wager on a selection with high odds and then trying to lay that same pick at a lower price on an exchange platform like the Betfair Exchange.