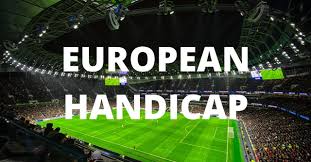 What is the European Handicap System, and how does it operate?

The European Handicap (EH) is a form of handicap betting that is extremely similar to the Asian Handicap (AH), with the exception that this market focuses on three selections rather than two: home win, draw, and away win.

For example, in group A, a match between the 2019/20 Champions League winners, Bayern Munich, and Lokomotiv Moscow. Bayern Munich is clearly the overwhelming favorite in this match-up.

The following is an example of the European Handicap:

What bet won is determined by the option you make inside this market. This means that if you bet on Bayern Munich (-1) and they win by two or more goals, your wager will win, but if they only win by one goal, your wager will lose. Munich winning 2-0, 3-1, 4-2, and so on are examples of winning scorelines.

If Bayern wins by a single goal, the Draw (-1) option wins. So you’re effectively saying that you’re betting on the favorite to win by one goal, and that if you take away that one goal edge, it’ll be a draw. In this situation, the winning scorelines are 1-0, 2-1, 3-2, and so on.

The main difference to understand is that if you bet on Bayern Munich with an Asian Handicap (-1) or Lokomotiv Moscow (+1) and Bayern win by exactly 1 goal difference, your bet will be voided and your stake will be returned to you; however, if you bet on the European bet handicap, your bet will be considered a loss because the draw selection will be the winning outcome.

There is no Asian handicap option for EH Draw (-1)

What is the European Bet Handicap and how does it work?

A European handicap bet is similar to a 1X2 match outcome bet in that it is a three-way bet. As a result, it’s also known as “single handicap” or “three-way handicap.” In every match in which the two sides are significantly different in strength, the outsider is given a handicap in order to make it more difficult for the favorite to win the wager.

As far as I can tell, Asian Handicap does the same function. The key difference is that the European Handicap (abbreviated as EH) is always an integer figure, which means it may be matched to a goal differential. Instead of a -1,5 goal or -0,25 goal Asian handicap, the European handicap is always a -1, -2, or -3 goal handicap.

The major goal of the Asian Handicap is to eliminate the draw result (a non-integer handicap allows you to win or lose the bet), but the European Handicap also has a “draw” result. This is, of course, not the game’s real draw, but the “equalization” of the online bookmaker’s specific handicap.

Example of a European Handicap

The German National Football Team is playing Andorra at home and has an almost 100 percent chance of winning the game. Germany’s 1X2 bet odds should not be higher than 1.01. With a number of goals (typically 3 or 4), the European handicap favors underdogs Andorra, who must beat Germany to be deemed the victor. This increases the appeal of betting on this match because it is more difficult to precisely forecast the outcome.

If the European handicap is set at three goals, Germany is only considered the winner if they win by four goals or more, regardless of the final score. Whoever backs Andorra to win the bet will win even if they lose by less than three goals. If Germany meets the EH handicap and wins by EXACTLY 3 goals, the match is called a draw.

What exactly does this imply? Let’s look at it more closely:

If you choose Team A (-2) as your wager, you will win if the team in question wins by three goals or more.

Team B (+2): This choice helps the match’s underdog. If your backed team wins the match, draws the match, or even loses by one goal, your bet is deemed a winner.

When it comes to “draw” bets, there is a difference.

The absence of a draw is the major distinction between European and Asian Handicap. This is incorrect: the correct phrase is “the absence of a WINNING draw outcome,” as there are integer-number handicaps in Asian Handicap as well. However, there is a significant difference.

If the favorite wins by one goal in a -1 Asian Handicap bet, you’ll get your money back because the bet is deemed a “push.” You don’t win, but you also don’t lose.

If you bet on a -1 European Handicap and your side wins by a single goal, however, you will lose your wager. That’s because you can’t get your stake back in Euro handicap betting.

The only way you could have won the bet was if you had made a “draw” wager, expecting the favorite to win by a one-goal margin. Given that Asian Handicap is a two-way bet, this option does not exist.

When should European Handicap bets be placed?

You should be aware that betting on European Handicap odds carries a lot bigger risk than betting on 1X2. EH odds are easy to come by, as they are offered by practically every online bookmaker (Asian Handicaps are becoming more popular, but they aren’t accessible everywhere).

If you like to play by backing stronger teams to win, usually at home, you should check at European handicaps. If you discover matchups where the home team is anticipated to win by more than one goal, you can benefit handsomely.

The difference in odds might be significant, with 1.25 odds on a favorite being replaced by 1.60-1.70 odds on the same side winning by two goals or more. This can have a significant impact on your cash.

The drawbacks of this style of play are similar to those of Asian Handicap. In most circumstances, you’re betting only on a side’s motive, as a club may not go for a second goal if they believe they’ve already won the game.

What should you look out for when selecting European Handicap in betting?

Before you place a European Handicap bet, keep the following points in mind:

The European Handicap is used to boost the odds available for certain wagers on favorites. All matches with a big odds difference, on the other hand, are not the same. You should concentrate on specific match kinds, such as:

Looking for a better chance?

The European handicap is becoming more popular as a betting option in a growing number of matches, even though the odds of victory are technically equal. In this example, the EH is employed to provide the potential winner with more appealing odds rather than to balance the strength differential. Assume a neutral location has been set for a Barcelona-Real Madrid derby. If there are no severe absences, both clubs should have almost equal odds. For this match, online bookmakers will give European handicap odds, although the odds of overcoming the handicap will be substantially higher.

For example, if a Barcelona win is given at 2.20 in a 1X2 bet, the odds for their win in European Handicap -1 are above 3.50. In this scenario, a European handicap is recommended when we are confident in a team’s victory and want to choose better odds at a higher risk.

Other sports with a European handicap

The European handicap is used in sports other than football, but the concept is the same. There is a points handicap that includes a draw in basketball betting, for example. In order to win a draw bet, the favorite must meet the handicap once more. It can also be found in tennis betting (games or even sets differential), team sports like volleyball, handball, and water polo, and individual sports like darts and snooker. Even in American sports like baseball and football, some internet bookies offer a European handicap option.

The majority of bettors pick European Handicap to take advantage of this differential, resulting in a “draw” result. This means they bet on the favorite in order to cover the precise number of handicaps available (i.e. in case of 1 goal handicap, the favorite to win by one goal). This is a high-risk bet because the punter is only looking for a narrow range of results to win, but the odds are worth a shot.

The European Handicap, sometimes known as the three-way handicap, is comparable to its Asian equivalent but considerably easier to understand. It works by giving the underdog an edge or points by giving them a ‘lead’ at the start of the game, or a ‘penalty’ to the stronger team.

To get the -1 line in this European Handicap market, England must win by two or more goals. Andorra +1 is a winning bet if Andorra wins or draws. If England wins by a single goal, the draw -1 bet would be the winning line.