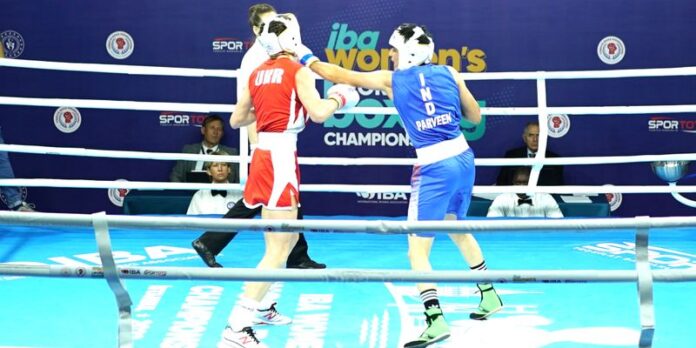 India’s Parveen pulled off a powerful performance to enter the second round at the IBA Women’s World Boxing Championships after thrashing Mariia Bova by a unanimous decision. The boxer from Rohtak completely dominated the 63kg opening round bout as she attacked from the very beginning.

Not just she timed her punches to perfection but also impressed in defense. Showcasing sharp reflexes, Parveen landed some clear punches and her relentless attack unsettled her Ukrainian opponent quite a few times as she completed a comfortable win.

After an impressive start to her campaign, Parveen will be up against the former Youth Olympics champion Jajaira Gonzalez of the USA in the pre-quarterfinals on Sunday.  This year’s event, which marks the 20th anniversary of the IBA Women’s World Championships, will be played till May 20.

The 25-year-old boxer from Telangana, Nikhat will square off against Mexico’s Herrera Alvarez in the 52kg opening round match. While Manisha (57kg), who received a bye in the opening round, and Saweety (75kg) will fight Nepal’s Kala Thapa and England’s Kerry Davis respectively.

2021 Asian Championships bronze medallist Jaismine, Anamika, and Shiksha will kickstart their campaigns in the round-of-32 on Thursday. Jaismine will face challenges from the two-time Youth Asian Champion Porntip Buapa of Thailand in the 60kg category while Anamika (50kg) will fight against Romania’s Eugenia Anghel. Shiksha, who was handed a bye in the opening round, will play Argentina’s Herrera Milagros Rosario in the 54kg match.

In the last edition of the tournament, held in Russia in 2019, Indian boxers secured one silver and three bronze medals.