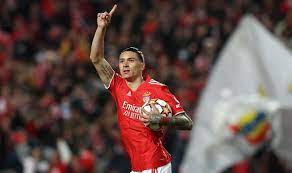 According to the Athletic, Benfica’s Darwin Nunez has attracted a lot of attention from within European football as Chelsea, Paris Saint-Germain and Manchester United are all keen on a move. The 22-year-old has thrived for the Portuguese giants this season, netting 34 goals across all competitions.

With Erling Haaland’s future now done and dusted, Darwin Nunez is reportedly next as the 22-year-old’s breakout season with Benfica has seen interest in him spike. The forward has enjoyed a sensational season for the club, netting 34 goals across all competitions which is a tally that includes six in ten Champions League appearances. However, it also marks his highest return as a forward with Nunez scoring just 13 goals last season and 16 goals the season before, with UD Almeira in the second tier.

However, that hasn’t stopped interest in him rising with more than a dozen clubs from across Europe all keen on signing Benfica’s latest star. But the Athletic has reported that while plenty of clubs are interested in him, only three lead the race for the 22-year-old with those being Chelsea, Paris Saint-Germain and Manchester United. The report indicates that all three sides are looking at the 22-year-old longingly with Benfica open to selling the forward next summer.

Yet while the Liga Nos giants are open to selling Nunez, their asking price is somewhere around €70 million with them also keen to get a deal done as soon as possible in order to sign and blood a replacement before the season starts. But that may become complicated as the Athletic has further reported that all three clubs will need time to get their plans in place because of various circumstances and thus a move could take some time.