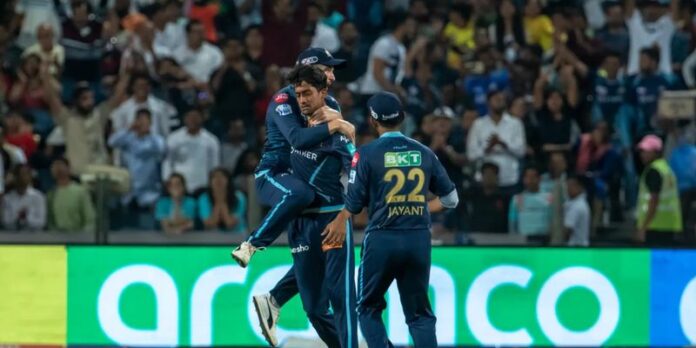 Gujarat Titans’ Sai Kishore has taken an excellent low catch on his IPL debut on Tuesday during their game against Lucknow Super Giants at MCA Stadium. He was standing at the backward point region, and the dismissal was one of the in-form batters of this ongoing edition, Quinton de Kock.

Lucknow Super Giants (LSG) got off to a stteady start against Gujarat Titans (GT) on Tuesday in Match 57 of the ongoing Indian Premier League (IPL) 2022 at Maharashtra Cricket Association Stadium, Pune. After coming to chase a below-par 145, both Quinton de Kock and KL Rahul took time to settle in the middle as they only scored 12 off the first three overs.

Yash Dayal came into the attack in the fourth over. Quinton de Kock tried to shift the gear, only to get a top-edge which went for six over the ‘keeper. Then, the next ball was fuller outside off. De Kock tried to slash that, but it came towards Sai Kishore, who was at backward point. Kishore, the debutant, saw the chance and dived forward to complete a tricky low catch. With that, de Kock fell after scoring 11 off 10 balls.

Rahul departed soon after, scoring eight off 16 balls as lSG were reduced to 24/2 in five overs.