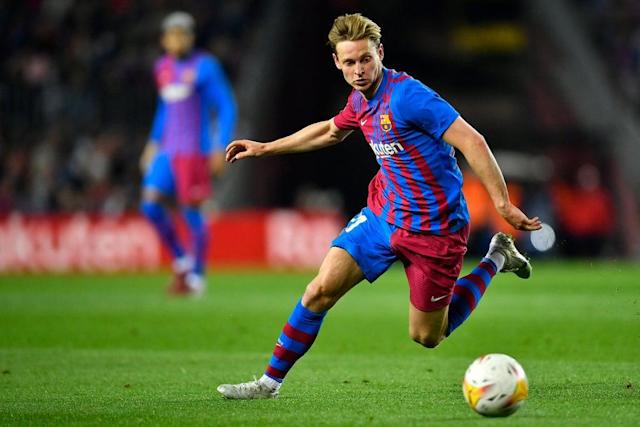 Manchester United legend Rio Ferdinand has revealed that he believes Barcelona midfielder Frenkie de Jong would be a great signing for his former club and believes that the Dutchman has the qualities to succeed in England. The Dutch midfielder has been reported with a move to United in the summer.

Barcelona signed Frenkie de Jong in the summer of 2019 from Ajax for an initial fee worth €75 million. The Dutch midfielder has cemented his spot in the starting lineup for the Spanish side due to his ability on and off the ball. The Catalan club’s financial woes off the pitch have resulted in a slump in recent years although the arrival of former icon Xavi Hernandez as their manager has spearheaded a change that would catapult them back to the top of European football.

Earlier this week reports emerged that Barcelona are said to be open to selling Frenkie de Jong this upcoming summer transfer window in their bid to raise funds to sanction improvements on and off the pitch. It is understood that the incoming Manchester United boss Erik ten Hag has prioritized the signing of the 25-year-old and would love to be reunited with his compatriot at Old Trafford ahead of the 2022-23 campaign.

Former United defender Ferdinand has asserted that United should sign the Dutchman to reinforce their squad.

“I’ve always thought he was a top player. They’re saying Frenkie de Jong could be the first player to come in under Erik ten Hag and I would be saying: ‘Yes, great signing.’ He’s not huge in terms of the frame but he is quick with the ball, a really good dribbler, can get out of tight situations, makes good decisions, good passer, and his balance and dribbling ability are really good,” Ferdinand spoke on his FIVE programmes on YouTube.

“[United] are a team who are looking for players who can control the ball and control the game and get the team functioning in terms of balance and possession. I think he would be a good addition,” he added.