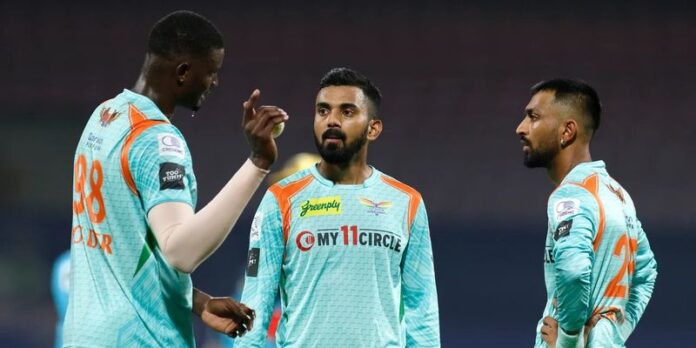 Lucknow Super Giants captain KL Rahul was fined Rs 24 Lakh for maintaining a slow over-rate against Mumbai Indians during their last game victory by 36 runs. The rest of the members in the Playin XI were also penalized and were fined Rs 6 Lakh or 25 percent of the match fee, whichever is lower.

Slow over-rate has been an issue in the IPL 2022 as there have been several incidents of a captain being penalised for that. Lucknow Super Giants won by 36 runs in their last game against Mumbai Indians lately. However, LSG maintained a slow over-rate. This was the team’s second offense violating the IPL’s Code of Conduct relating to minimum over-rate offenses. KL Rahul was fined Rs 24 Lakh while the rest of the members in playing XI were fined Rs 6 Lakh or 25 percent of the match fee whichever is lower.

“The Lucknow Super Giants have been fined after they maintained a slow over rate during their Indian Premier League (IPL) 2022 match against Mumbai Indians at the Wankhede Stadium, Mumbai on April 24,” an official release stated.

KL Rahul played a crucial knock for LSG with a century but their bowlers set up the win for them. LSG scored 168/6 while batting first and MI kept losing wickets in the chase. They were restricted to 132/8 and LSG won the match sitting at the fourth place in the points table.