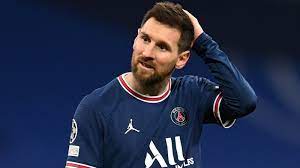 Barcelona president Joan Laporta has proclaimed that he has received no word over a potential return to the Camp Nou for Lionel Messi and revealed that the Catalan side is not considering making a move for the Argentinean. Messi joined Paris Saint-Germain in the previous summer on a free transfer.

Lionel Messi was forced to depart boyhood club Barcelona, after spending two decades at the club, as the Spanish giants had to resolve their financial woes off the pitch. The Argentina international cemented his status as one of the all-time greats of the game during his tenure at the Camp Nou.

The 34-year-old scored 672 goals and registered 303 assists in 778 appearances for the Spanish side while claiming several major silverware. The seven-time Ballon d’Or award winner hasn’t made the desired impact in his new surroundings as he has been unable to replicate his form from Spain in France.

Messi was unable to prevent PSG’s Champions League exit at the hands of Real Madrid which has created a sense of hostility among supporters as they let their frustration known in recent weeks. A sensational return to the Camp Nou has been mooted in the media with Barcelona duo Jordi Alba and Pedri making their desire of seeing Messi make a return known in the past week. Barcelona president Laporta asserted that they are not considering making a proposal to bring the Argentinean back.

“I’ve received no message from Messi or his camp over a possibility of returning back to Barcelona. His departure almost made me feel more bad for personal and family reasons rather than just strictly sporting,” Laporta said on RAC1.

“We’re not connsidering [Messi’s return]. We are building a new team, with a mix of young players and experience – the symbiosis is working. But Leo is Leo and he’ll always be a winner. For me it sure wasn’t easy [for him to go], but as it happened, I thought about the club [finances], I couldn’t put it at more risk. I think we did what we had to do,” he added.

The Barcelona chief also dismissed the notion that Kylian Mbappe or Erling Haaland could be persuaded to join the club in the summer.

“Haaland or Mbappé to Barça? The conditions I’ve been told about these two deals… we’d never accept to spend those figures, no way. I see both of them really far from Barça,” he told RAC1.