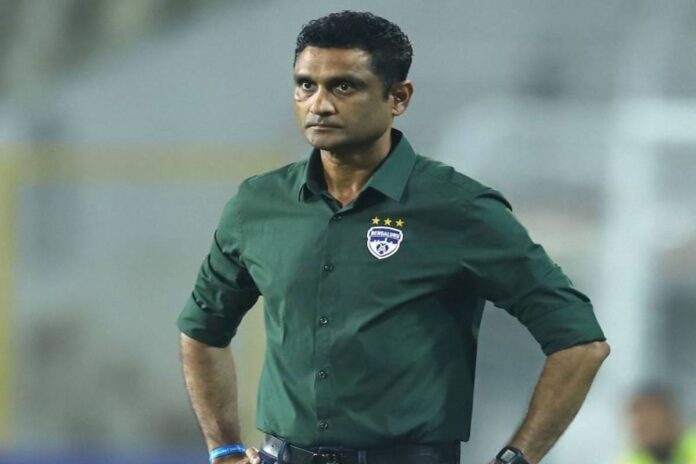 Bengaluru FC interim coach Naushad Moosa admitted that they were lucky to get a point against Chennaiyin FC last evening at the Fatorda Stadium. The Blues remain at the sixth position in the league table, having collected 19 points from 16 matches, with just four wins to their name.

Bengaluru FC got a new life in their previous game, having won their first game in 2021 and also revived their chances of making it to the playoffs this season. To keep the ball rolling, they had no other option but to claim three points in their clash against Chennaiyin FC on Friday evening. Unfortunately, their display was disappointing, playing out a stalemate, hurting their titles aspirations in the process. Bengaluru FC interim coach Naushad Moosa feels that they were lucky to get a point from the game.

“To tell you the truth, we were lucky. They got a lot of scoring chances but missed. The way we played in the first half that’s not the way we wanted to play and during the break, we could speak to the boys and recover in the second half. We started holding the ball for long periods. That’s what we wanted to do. But it didn’t work in the first half,” said Naushad Moosa, during the post-match press conference.

The former India international heaped praise on their custodian Gurpreet Singh Sandhu, who produced a sensational display to deny their opponents a goal. Even though Moosa feels is good to have a clean sheet at this juncture of the league, they would have been satisfied with all three points.

“Right now, of course, it’s nice to have a clean sheet. But the way things are in the points table it’s important for us to get those three points. Both the goalkeepers were really good today. Especially, Gurpreet, he had some close saves,” added the manager.