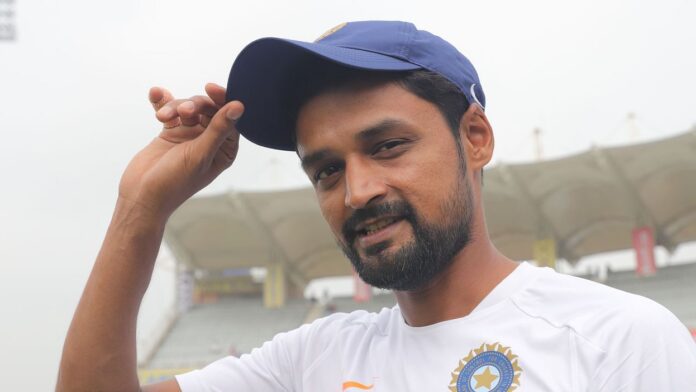 At the end of second day’s play, Shahbaz Nadeem has stated that the wicket in Chennai was still good before insisting that the Indian batsmen could capitalise on it in the remaining days. He also expressed that the plan was simple, to bowl the right line and length on the flat wicket at Chepauk.

England picked up from where they left on day one, catching the Indian bowlers off-guard with their counter-attacking start early on in the day. The partnership between Joe Root and Ben Stokes changed the narrative of the game, from being 263/3. For the Indian bowlers, it was yet another day of toil on a wicket that had nothing to offer. Despite that, the Indian bowlers bowled to the line and length, getting some purchase and wickets towards the end of the day.

Among the successful Indian bowlers on the day was Shahbaz Nadeem, who picked up the two crucial wickets of Ben Stokes and Joe Root. However, it came at a mighty cost, the left-arm spinner conceded 167 runs in his 44 overs, the second most from an Indian bowler in terms of overs bowled. The left-arm spinner, at the end of day’s play, stated that the wicket still has no signs of wear and tear before stating that the Indian batsmen will capitalize on the wicket.

“Our game plan was to dismiss them as soon as possible. The pitch is still very good for batting; I’m sure that our batsmen also would capitalize on the pitch and score tomorrow,” a visibly tired Nadeem told pressers at the end of day’s play.

“Basically, the plan was to bowl in the right areas and line. If you go for wickets, you will end up conceding more runs. The plan was always to bowl the right line and length and the batsmen could end up making mistakes. This was our plan for the day,” he added.

He also opened up on the no-ball miseries encountered by the Indian bowlers, with the left-arm stating that it was the jump that had caused him to err at the bowling crease.

Nadeem also opened up about his clash with Ben Stokes, with the English all-rounder taking the left-arm spinner in full throttle with his sweep shots.

“Ya I feel I was trying to bowl in the rough outside the off-stump. But he (Stokes) was trying to counter me with a reverse sweep and stuff. I did try and change my line and length and then came from around the wicket, he hit me straight to the fielder. He did try and attack me.”

However, the Jharkhand spinner had the better of the duo and stated that the key to bowling on this pitch was a lot of patience and sticking to one’s gameplan.

“I felt really happy to pick Ben Stokes and Joe Root’s wicket, it felt really nice on such a wicket. It feels really nice to strike for your team, especially when they require. He was sweeping really well, you really have to plan well for him. There was some problem bowling early to him (Root) but if you stick to your line and length, you will end up getting results,” he concluded.