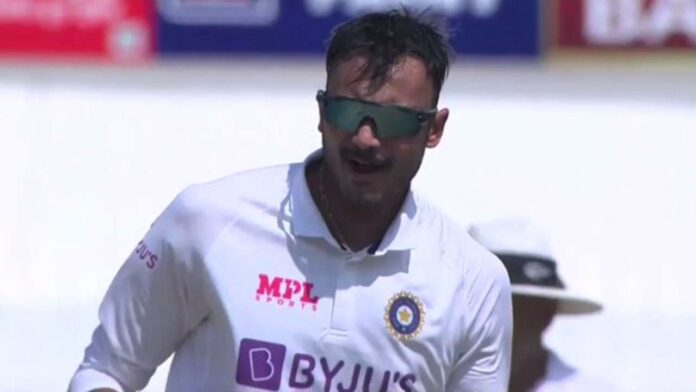 Debutante Axar Patel impressed one and all when he got rid of Joe Root as his first Test scalp and revealed that the speed at which he bowls, he knew he could get him out. He also expressed his happiness at playing for India and stated that it’s an incomparable feeling for him.

One of the biggest concerns for India going into the second Test was how they were going to get the English skipper Joe Root out. The English no.4 was putting up one sweeping masterclass after another and had got two double-hundreds and one 186 in the last three Tests he had played. But Axar Patel, who was playing his first Test only, took only a few deliveries and got rid of the English skipper on six which was a massive moment in the context of England’s first innings. As a result, the Three Lions could never recover and were bundled out on 134 conceding a massive lead to India, who had made 329.

For Axar Patel, he always knew that he can get the big fish given the faster pace at which he bowls in comparison to his peers. And that was the case as well, revealed the left-arm orthodox spinner.

“When I was watching the first Test, I noticed that Joe Root plays a lot of sweep and reverse sweep shots, and I thought that with the speed that I bowl at, I had the opportunity to get him out, and I wanted my first wicket to be his dismissal,” Axar told Pujara in a conversation, reported HT.

“I thought that if he tries to sweep my delivery, he may get out LBW. When he went for the sweep shot and made the mistake, to get an in-form batsman who has recently hit multiple centuries and double centuries. You can see it in the video how happy I was to get the wicket,” Axar said.

Axar became the latest debutante for India which has been quite prevalent this year with many players making their respective debuts for the country in 2021 be it Washington Sundar, T Natarajan, or now Axar Patel. He expressed his happiness at playing for India and said nothing compares to the great feeling.

“No words can describe the feeling of playing Test cricket for India. It feels really good.”