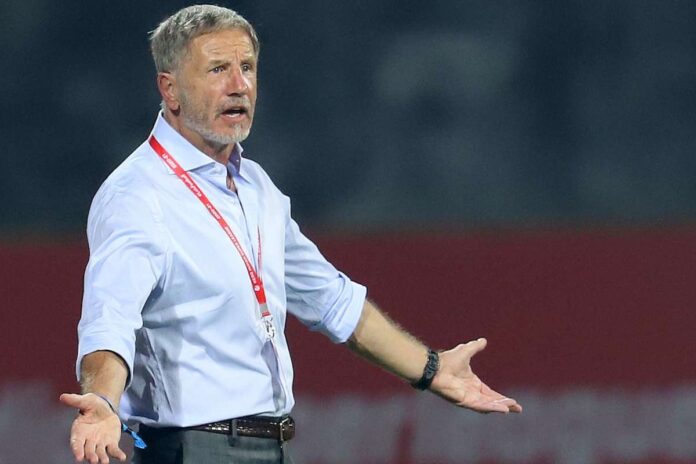 Ahead of the clash against Bengaluru FC in the ongoing ISL, Odisha FC Head Coach attended the Pre-Match Press Conference and looked very positive with his words. The experienced gaffer spoke about what all his team has to do to make sure that they get all three points on offer in tomorrow’s game.

“To be very fair and honest, we have had chances to beat bigger clubs, ATK for example. But, to do that against anybody – not just Bengaluru – we got to make sure that we defend properly, we take our chances and play our own game. If we do that with quality, I think we have shown we can run everyone close,” the 67-year-old coach mentioned.

Speaking about the change in the coaching structure at BFC, he said, “Well I think it’s always difficult to know how a team is going to react after a coach leaves. Sometimes they become enthusiastic, sometimes they feel it’s in a little bit of chaos and sometimes there’s not a great difference. But, the coach has got a job on his hands because it’s a big club. The coach comes in now and tries to put his own spin on things. He doesn’t always want to do the same things, and that’s always a difficult task. So I think he is tackling it well at the moment but it’s always a problem.”

In the absence of Steven Taylor, South Africa international Cole Alexander was the captain in the last game against Hyderabad FC and he also scored an important goal in the 1-1 draw. Coach Baxter explained, “Cole is a leader whether he wears the captain’s armband or not. Steven has been a good captain for us and if he is fit, he will regain the armband but Cole will remain a leader if he has got the armband or not because he has such qualities, he has a very infectious energy and he leads by example. I think he shows the way.”

When asked about the expected changes ahead of the next match, the OFC Head Coach stated, “We have been best when we have tried to make few changes. But, we will look at the energy levels of the players and will make a decision based on that. But, we don’t want to make a lot of changes. I think the team that we have been putting together has been coming together. If we don’t have to we won’t make a lot of changes.”

Before concluding, he also highlighted the performances of Diego Mauricio – the top performer of OFC so far and Rakesh Pradhan who made his debut for the club in the previous game.

“Football is a team sport and there are individuals in that team. I want every individual of our team to feel that he has the right to be himself. Diego is best when he’s part of the team but he does best what he does well. So my job is to get Diego into a situation on the field where he’s good and to get him in a frame of mind that feels he can express himself. When we do that, Diego is a valuable player for us.”

“I thought he (Pradhan) made a confident debut. He got forward a lot more and exploited that flank maybe more than Hendry (Antonay) has been doing. He’s gotta know the balances within our team but he got forward and his natural left foot helped us. So I thought it was a good one and we have to see what we do in the next game, Baxter signed off.

Diego also accompanied his coach for the virtual interaction with the media and he said, “I am very happy with my individual performance but tomorrow is a good game against Bengaluru and winning tomorrow is very important. I am very happy to be playing under Coach Baxter and he is like a father for me. This is my first time in India and in the league but I have received good help from all the players and they all have become very good friends of mine.”