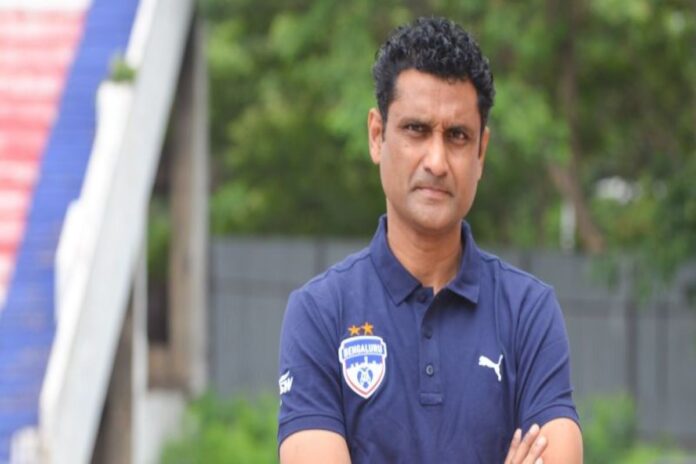 Bengaluru FC interim head coach Naushad Moosa is convinced that the league is still wide open and his side are not ready to give up so easily. The ‘Blues’ are placed at the seventh position in the league table, with 13 points from 11 matches, with just three wins to their name, losing four of them.

Bengaluru FC are currently facing a five-match winless streak, having lost four of them – a situation which they have never encountered since their inception back in 2013. The poor string of results saw the management sack their previous head coach Carles Cuadrat and appoint Naushad Moosa for a stop-gap period. They are set to face Kerala Blasters FC this Wednesday evening, and Moosa, a long-standing servant of the ‘Blues’, is convinced that the league is still wide open with nine matches left and they are not ready to give up so easily.

“We have not given up and we would like to get three important points against Kerala. We have nine more games. So let’s hope that we do better and get some points which would really help us. If you see the table, only number one and two are very close. So things are still open and we don’t want to give up,” said Naushad Moosa, during the pre-match press conference.

The last time these two sides met, earlier this season, Bengaluru FC cruised to a 4-2 victory over the Blasters, but things have changed a lot since then. The Bengaluru FC interim coach is not bothered about past results and feels that Kerala Blasters FC are more attacking and motivated now, leaving no room for complacency.

“I don’t want to think about the last game (against Kerala) that we won. We don’t want the players to be relaxed. The way they (Kerala) are playing, they are more motivated and attacking now. So we have to be careful about it and we need to look for those small mistakes that we could capitalise on and work on it. It won’t be an easy match for sure since they are high on confidence now,” added the manager.