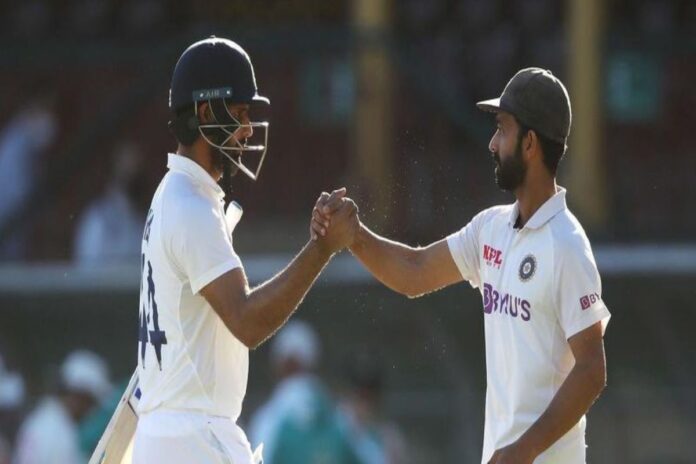 Walking on a tightrope is not everyone’s cup of tea and neither is sealing a place comfortably in the Indian team, Hanuma Vihari’s cup of tea. Coming into the Test in Sydney, one of the so-called flattest pitches in the country, the pressure was always going to be on Vihari.

Not just because of the endless runs he has scored on the domestic circuit, or his reputation as a prolific run-scorer but because of the tag ‘away’ specialist written all over him. Having played 11 Tests coming in the Sydney one, Vihari had just faced one innings at home. Now combine with the pressure of facing the Australian quicks, who had their tails up after Rishabh Pant’s wicket, you get it right?

You don’t still, he’s Vihari, his position in the Indian team is never secure and the fact that he hasn’t lived up to his bill thus far in the series has made it worse. When everything seemingly is going against you, the last thing you would want is an injury. And thus arrived that as well, a hamstring one, which has invariably ruled him out of the fourth Test already. His foreseeable future too hangs in limbo just as the Sydney Test, India didn’t have a chance at drawing this one.

27 overs after taking guard, without a hamstring injury and with a lot of pressure, Vihari became a hero but he didn’t do it like a sane person, he walked the tightrope and rode his entire legacy on that same rope while several tightrope artists in Sydney were earning their wages. He was immaculate, his mannerisms and attitude stemmed from the reputation that he had built about himself.

He is vastly experienced. He has scored daddy hundreds in domestic cricket. He is a natural run-maker.

But this situation demanded none of this, this demanded something that he had on the line, his career. He could have walked away, injured, limping on his leg without much criticism yet he stood, weathered the storm to not just ride his destiny but build a legacy out of it. 93 in North Sound and 111 in Kingston, yet he had shown and sown enough to reap the rewards – a place in the Indian playing XI. But was he made to become a hero or die trying to be one?

2018 – Vidarbha have just piled 800 runs, plenty of miseries on the Rest of the India team in Nagpur. The talk of the town was Prithvi Shaw and Mayank Agarwal – 51 and 11 they made but at 98/6, Vihari had a chance, probably at sealing something dramatic for himself, he had to be selfish, there was no way they were going past the Vidarbha challenge yet he tried, scoring 183, stitching a 212-run partnership with Jayant Yadav. Litmus test passed, domestic season passed and yet somewhere, there were still doubts over his quality.

“I have always had the hunger of scoring big runs but once you have that maturity and experience and exposure then you tend to have more confidence within yourself and that is what has helped me,” Vihari explained his approach.

Vihari’s career has been largely deconstructed into a struggle and immense grind but throughout that phase, the element of luck had always somewhere been there with him. Manish Pandey, Karun Nair, and Shreyas Iyer – all miles ahead of him at one point withered, failed to grab their opportunity but Vihari was there. MSK Prasad became the chief selector in 2016, his performance ever since has been best in the country and at an average of 56.75, the highest in Indian cricket amongst the middle-order status quo. Vihari has moulded his game around the Indian needs – more often than not, making it his prime duty for the country.

He has done well in the past, a fifty against England at The Oval, another half-century in Christchurch. But his biggest innings in an Indian jersey would be an 80-minute knock in Melbourne, where he scored just eight but made a vital contribution – knocking the shine off the red-ball, reducing the threat, all of that opening the innings. India needed someone to step it up, he did on that day. In Sydney, another one of the venues, where the Australians were up and singing, India needed a hero.

Before walking out, Vihari had just witnessed the Pant pandemonium that had erupted in Sydney, leaving the Australians shocked and perplexed because the game was in their bag. Yet one mistake and the flood gate seemingly has opened, or so Australia thought. Vihari stood there, still stumbling his thoughts over his dropped catch, giving a reprieve to Marnus Labuschagne. He also has a frame of his run-out hovering in his mind, the time is a problem; not the runs.

161 balls later, he takes India to safety, getting rousing applause – not because he had fought a war but he had fought two – one within himself and the other with the Australian bowlers.

His mind wavered throughout the innings, it might very well be his last game in an Indian jersey but he wouldn’t just do down, with the home series against England coming. With Jadeja injured, he could have sensed the opportunity. Hit at every nook and corner of the body, stung by the multiple throws from Matthew Wade, verbally and physically.

Yet, as dramatic as a tightrope artist, Hanuma Vihari rides his own destiny and legacy on a tightrope rather successfully, absorbing all the pressure. He can’t walk, he can’t definitely run but what he can be is proud. “Pathu Pathu ball aadanum,” “Aadu mama aadu,” kept him going from time to time.

Sweat, endurance and several hours of hard work later, Vihari’s knock had arrived but the domestic bull hadn’t quite yet.