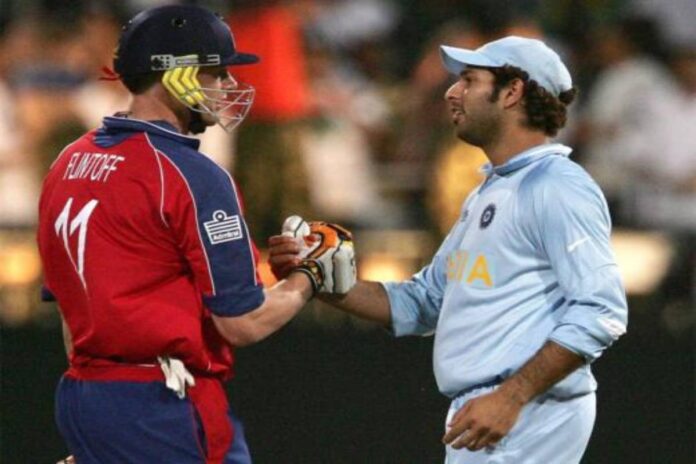 Two of the feistiest cricketers the game has been witness to, Andrew Symonds and Yuvraj Singh go head to head in a very special January 29 edition of Friday Fights. We very well know they are the clutchest of clutch cricketers our sport has seen, but who will come out on top in a H2H battle?

We’ve said it before here in Friday Fights and we’ll say it again: if there is one cricketer in the history of the game you don’t wanna pick a fight with, it’s Andrew Symonds. Not only does he have an intimidating outlook, he also possesses the cunning ruthlessness of an actual fighter. This ferocity reflected in his career, where he made a name for himself through ruthless aggression – be it with bat, ball or on the field.

But then again, if there’s one cricketer who has made a career out of overcoming the odds, it’s Yuvraj Singh. That said, even if we are using cricketing statistics as the yardstick, downing Symonds inside the squared circle is no mean feat. So, does Yuvi have it in him to overcome the odds yet again? Well, let’s find out.

Yuvraj and Symonds, during their heyday, were two very similar cricketers, but, at the same time, they had contrasting approaches. While the Aussie loved to be gung-ho from the get go, the southpaw, well, loved to bide his time. Symonds brings the very same approach to the ring, too, as with a thumping right hand in the form of his average of 39.75, he takes the lead over Yuvraj, whose 36.55 leaves him behind.

ROUND 2 -> BOWLING AVERAGE: TWO IN A ROW FOR ROY

After an underwhelming R1, Yuvraj senses the need to raise his intensity and raise his intensity he does. He is quick off the blocks this time around and throws a sneaky 1-2 (Jab-Right cross) combo in the form of his bowling average of 38.68. That is actually pretty good for a part-timer but, you know, Symonds was more than just a part-timer. The Aussie responds with a mauling right cross (read: avg of 37.25) to register a 2-0 lead.

ROUND 3 -> RUNS PER INNINGS (ICC TOURNAMENTS): MAKE THAT THREE!

Big games were the forte of these two men and nothing in our sport gets bigger than ICC tournaments. But while the crowd cheer their heart out for Yuvraj expecting an encore of 2011, there is a flummoxing drop in standards from the Punjab batsman. Bizarrely, he throws an extremely innocuous punch via his run-per-innings of 32.76, and this is a figure that is eaten alive by ‘Roy’ Symonds, who with numbers of 36.31 thwarts the southpaw to gain full control.

ROUND 4 -> BOWLING AVERAGE (ICC TOURNAMENTS): AND YUVI IS ON THE BOARD

Well, well, well, that’s the thing about champion cricketers – you can’t keep them down for long. After an uncharacteristic no-show with the bat in the previous round, Yuvraj soares back in style in this round – with the ball. Cocky with a 3-0 lead, Symonds, with a tinge of complacence, throws a sloppy jab, which Yuvraj capitalizes on. The southpaw not only blocks the punch, but retaliates with a thundering left-hook. Yuvraj’s bowling average of 27.04 is leagues above the 55.87 of Symonds, who all of a sudden is left red-faced.

ROUND 5 -> FREQUENCY OF FIFTY-PLUS SCORES: AND SYMONDS WIDENS THE GAP AGAIN

Symonds might not be so good at switching on and off with a mic in his hand – ask Labuschagne, he’ll tell you – but boy he is a menacing presence in the ring; he never lets it slip. Fuming with the loss in R4, he responds in the only way he knows: through aggression. Yuvraj’s tally of a fifty-plus score once every 4.21 innings is excellent, but Symonds’ 4.47 blows it out of the water. The Australian bludgeons his opponent with a thumping right-hook to regain authority.

ROUND 6 – > Strike Rate (batting): YUVRAJ IS STARTING TO FEEL THE HEAT

What separated Symonds from his contemporaries back in the day was that once he sniffed an opening, he would dominate and simply not look back. He, in fact, would not just dominate, but mercilessly pound his enemy. Yuvraj was at the receiving end many a time a decade and a half ago and well, he is the victim again today. Well and truly having the edge in the contest, Roy unleashes his power. With his ludicrous strike rate of 92.44, he unleashes a devastating 2-3-2 (Right cross-Left hook-Right cross) combo on Yuvraj, whose SR of 87.67, despite being excellent, cannot hold up.

Now then, it’s getting beyond frustrating for Yuvraj. He has just won one of the first six rounds – pretty appalling considering his reputation – but worse, he simply can’t seem to get the better of his opponent even when he thinks he has. The Punjab all-rounder takes a pragmatic counter-punching approach in this round, yet it yields him no results. He thinks he has done enough with his ER of 5.10, but, eventually, Symonds overpowers him marginally with his ER of 5.00. Heart-shattering for the Indian.

ROUND 8 -> WICKETS PER INNINGS: YUVRAJ IS OFFICIALLY DEFLATED

You’d think Yuvi will not recover from this blow. Known for his golden arm which takes wickets – heck, it won India the World Cup in 2011 – the left-armer is certain that Symonds cannot beat his tally of 0.68 wickets per innings BUT HE IS WRONG. Keen to overturn the slender margin of defeat in R7, Yuvraj goes for a juicy left cross and lands it, but the Australian remains unmoved. The big Queenslander, who takes 0.84 wickets per game on average, instead responds with a mighty right cross that not just shakes the Indian but floors him. The end looks near.

ROUND 9 -> NO OF BALLS BOWLED PER GAME: AND SYMONDS KNOCKS OUT YUVRAJ!

THERE IT IS! THERE IT IS! ANDREW SYMONDS KNOCKS OUT YUVRAJ SINGH! Honestly, you could see it coming in a way. Despite coming close, Yuvraj was never really in the contest and Symonds walking away with the W always felt like a mere formality. Deflated and drained, Yuvraj, who bowled a mere 16.6 balls per match, has a half-hearted swing and misses, and Symonds senses his opportunity and pounces. The Australian leans and delivers a colossal uppercut that finishes his opponent off.

Well, that was borderline underwhelming. The pre-match hype promised an extremely close and riveting contest, yet the actual bout left a lot to be desired. Symonds grew in stature and confidence with every passing round and the contest pretty much became one-sided by the time we got to the final three rounds. Nevertheless, there were quite a few learnings from today’s bout, not least that Andrew Symonds is right up there with the greatest of all time.