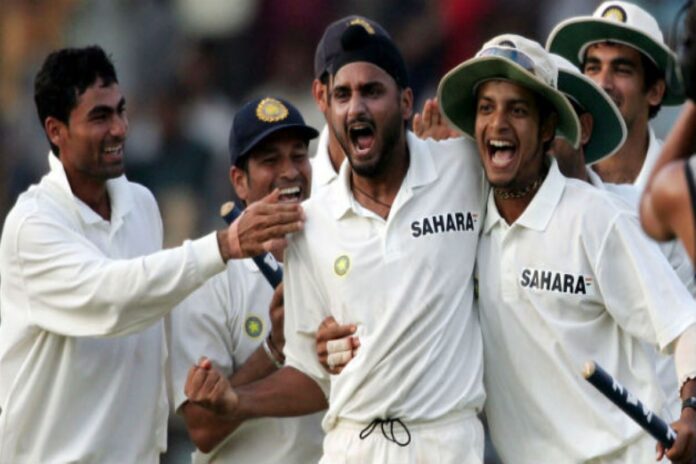 Welcome to the series where we present you a moment, a game in history that has shaped the way the sport has been played, in our segment ‘Throwback Thursday.’ This week, we go back to the Mumbai Test of 2004 where Murali Kartik and Harbhajan Singh spun a web around to help India to an unlikely win.

It is November 5, 2004 – an autumn afternoon in Mumbai. You don’t have to drain yourself in the sapping energy but there is moderation. One that climbs the ladder of hope to show you the most pleasant sunset ever. But that was for another day. With over 10,000 worried spectators on the stands, India vs Australia series was veering towards a ludicrous ending. It was perennial Australian torturer Harbhajan Singh at the fore again. Australia were nine down, McGrath was facing Harbhajan eye-to-eye, with just 14 runs separating the two sides.

India were not just riding on hope but they were about to inflict something Australia had done earlier – over and over again – and even a couple of afternoons ago. If you have read the title of the story, you definitely know what happened but that was just part of a larger narrative. It was a show of valor, aided by a lot of extraneous factors, but it was also a culmination too.

India and Australia always had a fierce rivalry, at least in their respective home conditions. Apart from the initial years, on either side of World War II, it was Don Bradman and his world-beating Australian team that was so hard to contain. But since it became competitive aided by some fierce Indian players like Vinoo Mankad and Polly Umrigar. But a win was far and few in between.

1979 gave hope. India breached the Aussies, albeit at home, in the only six-Test series ever played between two nations till date. And after that, it became the fortress that Steve Waugh later said, “the final frontier”. But Waugh’s Men got annihilated by some of the most spirited performances ever shown by the Indian team in the 2001 series. Ricky Ponting had got a scare in the 2003-04 series when Rahul Dravid stood tall to play some of the most prolific innings played by an Indian to help retain the Border-Gavaskar Trophy.

By the time, the Aussies came to India for a return tour a year later, things had to be heated up. Shane Warne and Ricky Ponting might not be there, but there was a certain Glenn McGrath, aided by the excellent Michael Kasprowicz and Jason Gillespie. Adam Gilchrist had the mantle for the first three Tests but the presence of Justin Langer, Matthew Hayden, and Damien Martyn ensured it was as good an Australian team as it got.

India had their strongest ever batting line-up, sans Sourav Ganguly. With Anil Kumble and Harbhajan Singh in the line-up, you would always expect a lot more. But it was the dwindling fortunes that called its card. Michael Clarke, making his debut in the first Test in Bangalore, did what many superstars of the preceding generations had never really been able to do. Dancing down to Kumble and Harbhajan, Clarke made a brittle 151 on debut – the sign of a great youngster who would rule the arena with an iron fist. Indians were dreading the worst and it happened, Bangalore became a cursed nursery for India’s hopes.

Everyone literally stood up in the course of the series, making the Indians huff and puff in their own dig. From Martyn to Gilly, and even Jason Gillespie, with that excellent rear-guard of 26 runs off 165 balls in Chennai made Indians cry. It was a dominant position lost after Virender Sehwag scored a fantastic 155, with Mohammed Kaif and Parthiv Patel later adding their bonus runs. It seemed like India would come back from the Bangalore debacle but it was not going to be that easy. The Martyn-Gillespie partnership helped the Kangaroos to a draw.

From an Indian perspective, the less we talk about the Nagpur game the better. Australia didn’t just walk on the ropes, it seemed like they could very well do that on water. The broadcast qualities aside, one could easily forget the game was being played in India and not in the shore of Nagpur – the central Indian city of Oranges. In the typical Indian afternoon, marked by fear and anxiety of switching on the TV and seeing the tailenders walking back, Australia made it gloomier. India eventually lost by a colossal 342 runs and thus the series, for the first time in 35 years.

The series already lost in Nagpur, India made three changes to their side. Gautam Gambhir and Dinesh Karthik were handed debut caps in place of Aakash Chopra and Parthiv Patel respectively while Harbhajan returned to the side with Ajit Agarkar sitting out. The wicket was a typical Indian 2000s wicket – a raging turner where every ball you face was a lottery. It was supposed to be a boom or bust for the Aussies who were propelled by the return of Ponting.

After electing to bat first, India were blown away by Jason Gillespie and debutant Nathan Hauritz, posting a paltry total of 104 runs in the first innings. None of the Indian batsmen, barring Rahul Dravid, who scored 31, could stand up but the threat of the wicket spinning too much-spelt trouble for the Aussies too.

Anil Kumble and Murali Kartik spun their magic to account for nine wickets between themselves as the Aussies took a 99-run lead. With the threat of Australia batting in the fourth innings, you could always sense the anxiety but for that to happen, India had to deliver a batting masterclass in the second innings. Australia had just one spinner in their armoury and negotiating him meant half the job done.

VVS Laxman and Sachin Tendulkar fell into the Hauritz trap but India did enough to keep him at bay for the major part of it. But they would have hardly expected the kid-looking flashy Clarke to roll his arm over and do what he did that day. The slow left-arm orthodox spinner from the Liverpool region of New South Wales did what the Indians had done for years and years. He made full use of a deadly Mumbai wicket.

It gripped, it turned, and it drifted and rather unimaginably, the Indian batting line-up fell like a pack of cards once again. Barring Laxman and Tendulkar, none could really stand up and deliver a stunner, with India setting a modest 106-run target for the Aussies to achieve. Even on the worst of days, this was a cakewalk for the Kangaroos and a 3-0 frontier was not too far away.

But they say, you don’t beat India in India. You beat India, with thousand other demons playing in your mind. Justin Langer’s dismissal for a nought was just an anomaly in the larger picture but once Murali Kartik saw the back of Ricky Ponting, it started a flurry of dismissals none had any idea about.

At 58/7, Australia were staring at an embarrassing loss but Gillespie and Hauritz guided them to 78 when the latter was guilty of planting his front foot forward way too early as Bhajji struck him in front. 78/8 was the last thing they wanted but Michael Kasprowicz propelled them to 93. It was unbelievable scenes as Glenn McGrath entered the scene. A complete mug with the bat, but now it is the battle of winning and losing. Could he be