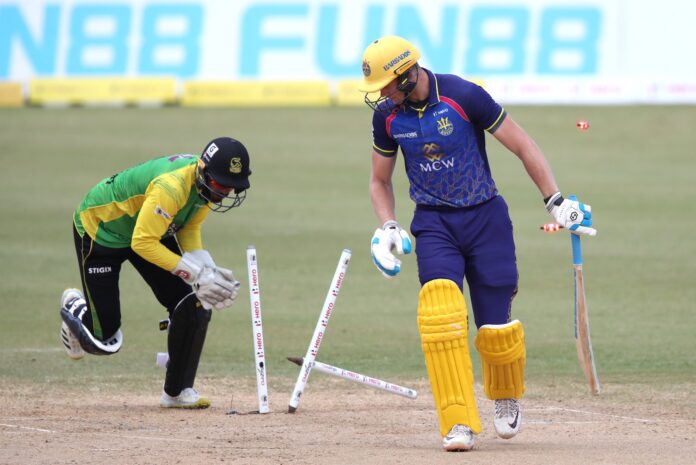 Jamaica Tallawahs ended Barbados Royals’ six-match winning streak in the CPL 2022 season with a six-run (DLS) win. The loss didn’t harm the Royals as they continue to occupy top spot in the Caribbean Premier League (CPL) 2022, while Jamaica have consolidated second place.

Tallawahs decided to field first after winning the toss. Imad Wasim gave Tallawahs a solid start, bowling two maiden overs and scalping three wickets in the Powerplay itself to leave the Royals tottering at 17/3 after six overs. But the South African duo of Quinton de Kock and David Miller rebuilt the innings for the Royals with an 83-run partnership as they reached 146/6 at the end of their 20 overs.

Wasim rocked the Royals early on, striking three times within the powerplay, getting rid of Rahkeem Cornwall, Kyle Mayers and Corbin Bosch. But de Kock, batting lower down the order at four, led the way with a scintillating 74 off just 43 balls, while receiving support from David Miller (34) for the Royals to finish on 146/6.

Chasing, Brandon King and Amir Jangoo gave their team a steady start, making 50 runs by the fifth over to put the Tallawahs in a commanding position.

Jason Holder picked up three wickets for the Royals, who looked like staging a comeback, but they just didn’t have enough runs to defend as Jamaica Tallawahs got to 126/5, winning by five wickets under DLS. Tallawahs needed 121 to win.

Tallawahs got off to a dream start chasing, with King and Jangoo hitting boundaries regularly in the Powerplay. But Obed McCoy took two wickets, before Holder’s three set the stage for a thrilling finish.

It was a six from Rovman Powell just before rain fell that proved critical, as it meant the Tallawahs finished ahead by six runs on DLS, to steal a five-wicket victory.