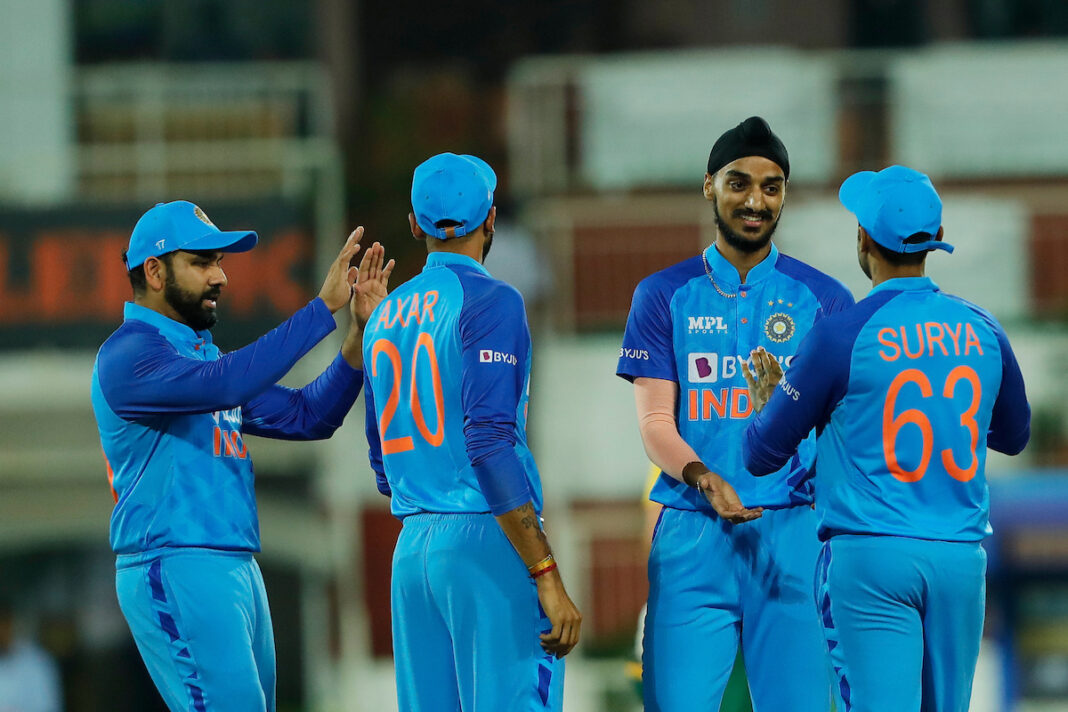 Arshdeep Singh and Deepak Chahar blew away South Africa’s top order in a magnificent spell of swing bowling, before vice-captain KL Rahul and Suryakumar Yadav slammed unbeaten fifties to give India an eight-wicket win over South Africa in the T20I series opener at the Greenfield International Stadium.

On a two-paced pitch with green tinge as international cricket returned to the venue after three years, Arshdeep (3/32) and Chahar (2/24) justified Rohit Sharma’s call to bowl first as they scythed through South Africa’s top-order by picking five wickets on the first 15 balls of the innings to restrict the visitors to 106/8 in 20 overs.

The duo, who did not play in the recent home series against Australia and replaced a rested Bhuvneshwar Kumar as well as Jasprit Bumrah – out due to a back niggle, were sensational in their T20I comebacks to set the base for India taking 1-0 lead in three-match series.

With movement in the air for the left-right pace bowling duo, suddenly the environment felt more of England and less of India, more of Test cricket and less of T20I match. South Africa batters were unable to move their feet well and fell like a deck of cards, with their scores resembling a binary code.

Chahar began the carnage when he castled Temba Bavuma with an inswinger on the final ball of opening bowler after bowling three outswingers. In the next over, Arshdeep got one to swing a length ball away from Quinton de Kock, who just chopped on to his stumps.

Arshdeep then enticed Rilee Rossouw to drive at a full and swinging away delivery, giving a thick outer edge behind to wicketkeeper Rishabh Pant and fall for a golden duck. On the very next ball, Arshdeep got a fuller ball to come back in and shatter David Miller’s stumps by hitting the top of middle stump.

Returning in the third over, Chahar made it three ducks in five balls for South Africa as Tristan Stubbs tried to cut a short and wide ball over point, but gave a simple catch to a diving Arshdeep at third man.

It took Keshav Maharaj’s fighting efforts with the bat, top-scoring with 41 and taking three boundaries off Arshdeep in the 19th over, apart from 25 by Aiden Markram and 24 by Wayne Parnell for the visitors’ to cross 100-run mark, a possibility which looked far away when the decimation by Arshdeep and Chahar reduced them to 9/5 inside first three overs.

A target of 107 looked slippery when a peach from Kagiso Rabada in the second over lured Rohit Sharma into playing at it and thick edge went behind to Quinton de Kock, who dived to his right to send the Indian skipper back for a two-ball duck.

Post power-play, where India made only 17/1, their lowest score in the six overs phase, Virat Kohli tried to cut a short and wide ball from Anrich Nortje, only for the extra bounce to take the edge behind to de Kock. After hopping and fending on his first ball, Suryakumar (50 not out) slammed back-to-back sixes – a top-edge on pull went over third man and a nonchalant flick went over backward square leg.

Rahul (51 not out) was kept quiet by a slew of outswingers and inswingers apart from surviving close lbw shouts off Parnell and Rabada, opened up by flicking off his wrists over long-on for six off Nortje, followed by Suryakumar slapping through point for four off Keshav Maharaj.

Rahul then pulled Tabraiz Shamsi over backward square leg for six and Suryakumar ended the over by flicking hard off his wrists through deep mid-wicket for four. Suryakumar enthralled the crowd with his trademark shot when he lofted inside-out with the turn over wide long-off off Maharaj.

A pacy full toss from Nortje was lofted over cover by Rahul for six while Suryakumar placed a slower ball through point for four as India started to coast towards victory.

Suryakumar continued to collect fours with ease against Rabada and reached his second consecutive fifty in 33 balls in the next over. On the very next ball, Rahul slog-swept Shamsi over backward square leg to reach his fifty in 56 balls and complete the chase in style with 20 balls to spare.