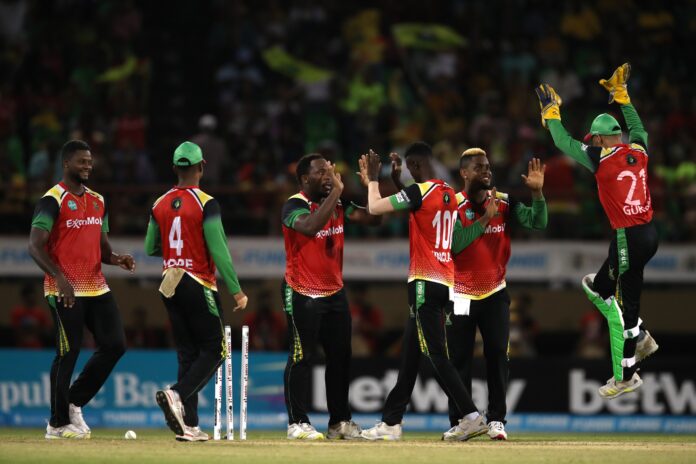 Guyana Amazon Warriors made it to the Caribbean Premier League 2022 (CPL 2022) play-offs following a convincing 37-run victory over Trinbago Knight Riders. The Amazon Warriors, with seven points from nine matches earlier, now have nine points and are second behind Barbados Royals (16 points from 9 games).

Three other teams – St Lucia Kings, Jamaica Tallawahs and St Kitts and Nevis Patriots – have eight points apiece, although St Lucia and Tallawahs have a game in hand. Trinbago Knights Riders have seven points and have completed their 10 matches, putting them out of the race for a play-offs berth.

Earlier, Trinbago Knight Riders won the toss and fielded, with Amazon Warriors opener Rahmanullah Gurbaz hammering 60 runs from 42 balls, much to the delight of fans at the Providence Stadium.

The Warriors suffered an early jolt when Ravi Rampaul showed his strength in the Power Play, scalping the wicket of Chandrapaul Hemraj. However, Gurbaz looked in fine tough, finding some beautiful shots as the run rate steadily continued to climb. Sunil Narine brought the Knight Riders back into the game by after dismissing Shakib Al Hasan and Romario Shepherd. But a late cameo by Odean Smith (23 runs from 7 balls) guided the Warriors to 173/6.

Needing under nine runs per over, Trinbago Knight Riders’ Tim Seifert and Colin Munro built a steady opening partnership, but after their stand ended, wickets constantly began to fall.

The Warriors picked up wickets regularly and were great on the field, showing their excellence with the dismissal of Nicholas Pooran. After skipper Kieron Pollard was out stumped, the Knight Riders just couldn’t put up any further resistance and were eventually bundled out for 136, losing by 37 runs.