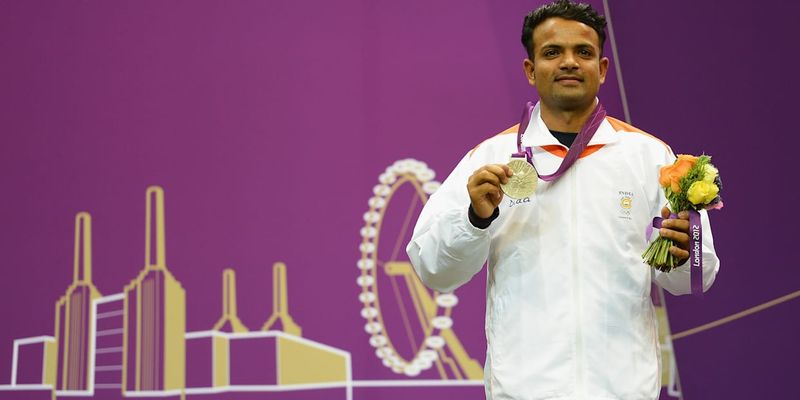 The crowd at Dr. Karni Singh Shooting Range in Delhi for the 64th Shooting Nationals in November 2021 was in for a big surprise, as after a five-year absence, Olympic silver medalist shooter Vijay Kumar made a return to competitive shooting. This has only raised hopes for the fans, about the future.

According to Kumar, returning to the shooting range was always on his mind. He did not, however, anticipate the event being as spectacular as Jon Snow’s resurrection in Game of Thrones. “People were taken aback when they watched me compete in the Nationals event in November. They assumed I’d stopped shooting, and I could hear their whispering in the stands while I concentrated on my aim. That is when I decided to surprise them by finishing in fourth place “In an exclusive interview with The Bridge.

Even 10 years after earning an Olympic medal and four years away from shooting, Vijay Kumar has not yet lost his edge. He participated in the nationals with only a week’s training and finished in the top 8 of the 25m Men’s Rapidfire pistol event. Despite the fact that he retired after 17 rounds, his comeback was one of the most frequently discussed subjects within the shooting community.

“It (returning to shooting) was always on my mind,” says Vijay with a modest smile on his face. After missing out on an Olympic quota for the 2016 Rio Games, Vijay took a break from competing on international stages. In 2018, he left his job in the Indian Army and joined the police department in his state Himachal Pradesh. He shared that he was occupied with the DSP training program, which kept him out of the shooting range.

“I got engaged in training in the police department, which requires two to three years. Then came the COVID outbreak and all the quota places for the 2020 Tokyo Olympics were also filled up. So I decided to focus entirely on my police training and then come back to my sport again once the entire training period is over,” says the Deputy Superintendent of Police in Shimla.

Vijay goes on to say that it wasn’t an easy decision for him either, because he understood that, despite being an Olympic medalist, being among the best shooters would be difficult, especially after a four-year hiatus. “I was aware of everything before rejoining shooting. My challenge was to start from zero again. After staying out of touch for four years, I simply did not think I will come back and beat everyone,” says Vijay.

The shooter had established modest goals for his recovery, which he continued to pursue. Vijay stepped up his speed in only around seven months, starting with competing in nationals, then getting his name up on selection trials and earning his way into the national squad. In fact, he presently has the second-best average in the men’s senior 25m Rapid Fire pistol event, which had no representation in the Tokyo Olympics.

“Before starting the competition, my focus was just to qualify for the nationals, then the trials and now I have made it to the national team. Slowly, I am ticking off my targets. And right now, my focus would be to become consistent. Though I am presently the second-best shooter in my category in India, my scores are not up to the mark when compared to the best shooters in the world. I still have a lot to catch up to do and have to be optimistic about getting a chance to compete in the upcoming international tournaments.” says Vijay, he is now lodged at a camp near Delhi and will remain there till May 18.

Vijay, a five-time Commonwealth Gold medalist, is also the oldest shooter in the camp participating in his favourite event. He is occasionally observed making ideas to his juniors, who are usually content to take inspiration from him. “There are plenty of talented youngsters in the camp, who are doing exceptionally well. While many were inspired by me, I am sure some were jealous seeing me back,” he adds bursting into laughter.

In addition, he will leave the training early to compete in the Himachal Pradesh state shooting championships. He adds, “The shooting culture in Himachal Pradesh is growing, as I am quite optimistic about seeing a few of the shooters from the state perform well in the Khelo India Games. I will be taking part in the state championships next week in Shimla so that my presence in the arena can inspire more youngsters to take up this sport.”

Vijay had been scheduled to represent India in the Shooting World Cup in Baku from May 27 to June 7, however, the National Rifle Association of India (NRAI) has opted not to send the pistol squad. “I don’t know the reason behind it. So, my focus will be on the Korea World cup, which is scheduled in July 2022,” says the Khel Ratna awardee for 2012.

The veteran shooter, who expected India to win two to three medals in the Olympics in Tokyo, was disappointed by the drought. “I don’t know what went wrong in Tokyo. I was even surprised that no one could qualify in the 25m pistol rapid fire event. But with so many talented shooters at present, I hope to see a big change in the Paris Olympics.”

Many of his colleagues, with whom he went on to compete in the London Olympics, have gone on to become full-time coaches. Gagan Narang, a bronze medalist in the London Olympics, owns his own shooting academy. Joydeep Karmakar, who just missed out on a medal in the same Olympics, also runs his own academy and has been named national rifle team coach. When questioned about his own coaching ambitions, Vijay made the following remark: “I would love to be a coach later in my career, but for the next 10 years, I have no plans of quitting the sport and taking part in international competitions. And definitely, the biggest goal right now would be to compete in the Paris 2024 Games.”

Vijay, who has been juggling his DSP work and his sports ambitions, will ask his boss for permission to take a long sabbatical to pursue the sport “I am balancing my job and shooting as well. My department is allowing me to participate in camps and national competitions. But in the long run, I am seeking permission for a longer duration to stay in the sport. As an athlete, we are always on the move — be it domestic events, international events, or even firearm imports. All this takes a lot of time,” concludes Vijay.

Roulette is considered one of the most popular casino games and is made available at almost every casinos online USA, offline or online. Roulette...
Read more