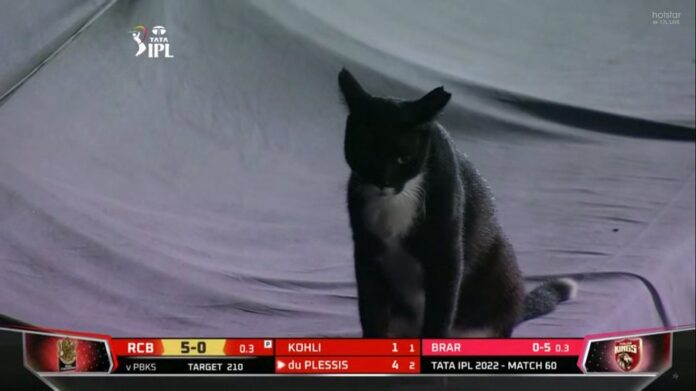 The game of cricket has often witnessed interruptions for crazy reasons, and one of the bizarre incidents happened during RCB’s chase against PBKS. It occurred during the first over of RCB innings when a black cat held up play for some time by sitting on the sightscreen before starting to move.

Royal Challengers Bangalore (RCB) were chasing a challenging target of 210 against Punjab Kings (PBKS) on Friday in Match 60 of IPL 2022 at Brabourne Stadium, Mumbai. They had got off to an active start as Faf du Plessis smacked Harpreet Brar for four off the third ball. But then, an interruption for some time happened, and it was because of a strange reason.

A black cat was sitting on the sightscreen in front of Faf, who was on strike. It walked across the top of the sightscreen before sitting, and Faf spotted her first. He did not want the distraction sitting on there, and asked the on-field umpire to stop the game for a few minutes. A few moments later, the cat started to move and the umpires asked to resume the play.