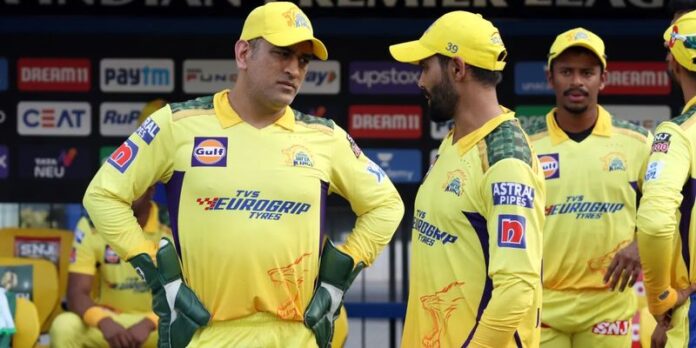 Chennai Super Kings were on top in the game against the Sunrisers Hyderabad as they went to defeat their opponents for the second time in IPL 2022. MS Dhoni returned as the captain of the side for CSK after Ravindra Jadeja handed over the reins to him and Dhoni felt Jadeja was feeling pressured.

Chennai Super Kings defeated Sunrisers Hyderabad for the second time in IPL 2022 to register their third win of the tournament. After losing the toss, CSK were asked to bat first and opening batters Devon Conway and Ruturaj Gaikwad put on a show as they smashed the SRH bowlers to every part of the ground at the MCA stadium in Pune. Gaikwad was the star with the bat as he scored 99 before being dismissed by T. Natarajan. The CSK bowlers also did well and Mukesh Choudhary impressed once again by picking 4 wickets in the game to help his team win.

MS Dhoni who returned as CSK skipper after Ravindra Jadeja decided to step down from the role talked about the leadership change during the post-match presentation. He also talked about how important it is for the franchise to have Jadeja perform as a cricketer at this stage of the tournament for them. “I think Jadeja knew last season he’d be captaining this year. For the first two games, I oversaw his work and let him be later. I insisted he’d take his own decisions and responsibility for them. You cannot spoon-feed everything to them. Once you become captain, it means a lot of demands come in and can affect the player’s performance and occupy their mind which I think was the case with him. I think captaincy burdened his prep and performances, it meant he could not go with the bat and ball with the same intensity, we had a deep-midwicket fielder,” Dhoni said.

MS Dhoni also added that he would love to have Jadeja – the batter, bowler and the fielder.