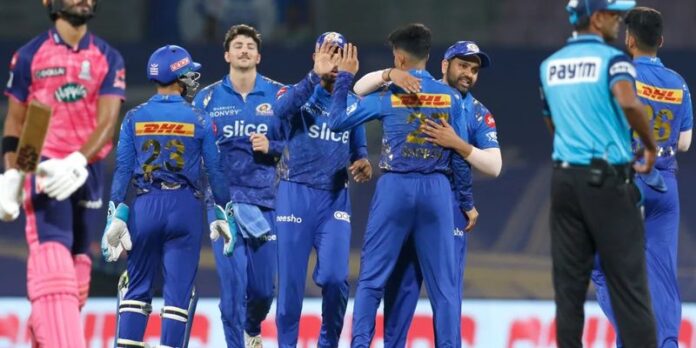 Gujarat Titans’ Director of Cricket Vikram Solanki has admitted that Mumbai Indians have a proud history in the Indian Premier League and they have always been a competitive side. Solanki has further mentioned that one can only take the five-time IPL champions lightly at their ‘own peril.’

Mumbai Indians (MI) are having one of their worst campaigns in the Indian Premier League (IPL) under Rohit Sharma. The five-time champions are languishing at the bottom of the points table, with just one win in nine matches. Their only victory came in their last encounter on April 30, against Rajasthan Royals (RR) at Dr DY Patil Sports Academy.

MI will next take on Gujarat Titans (GT), who have won eight of their first 10 matches, that too in their debut campaign. Though the Hardik Pandya-led side are coming to this fixture after a five-wicket defeat against Punjab Kings (PBKS). And, the franchise’s Director of Cricket Vikram Solanki is well aware of the fact that their next assignment is not going to be an easy one either.

“I would say that each and every one of those teams have the ability to beat any team on their day. Mumbai have a proud history if you think of the championships they have won. They are coming on the back of a win. They are a very competitive team,”  Solanki told ANI.

“They have match winners and we will have to be at our best to give ourselves a chance of winning the game. You can’t take any team lightly and, for Mumbai, you can take them lightly at your own peril.”

When asked about their preparations ahead of the playoffs, Solanki revealed that they are taking each game at a time, and have not started planning for too much yet.

“We are minded to make an assessment of each game. We perhaps wanted the best of each game. We are actually looking at the next game. We have a challenge ahead of us as far as Mumbai are concerned. We look to that game and we don’t look too far ahead.

“We must give a good account of ourselves. They are coming on the back of a win as well and any team at their best is sort of going to be a challenge in this sort of tournament. It is the very nature of the IPL. So, we must look at the next game and the game after that once we get past that. Yes, we must try to finish as high as possible,” he added.

The two sides will take on each other at Brabourne Stadium on Friday.