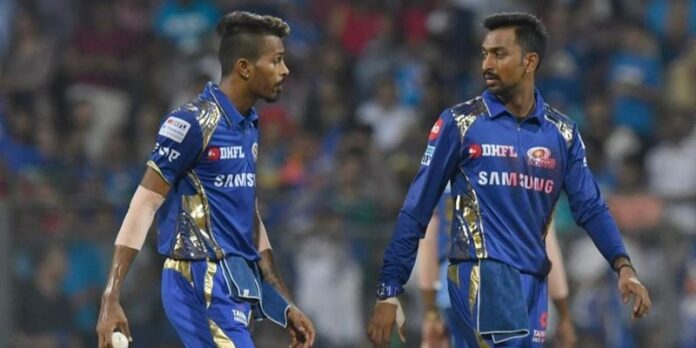 Mumbai Indians adopted outright middle-order flexibility in the last couple of IPL editions largely because of Pandya brothers – Hardik and Krunal.  In fact, they were so valuable that their presence made the Rohit Sharma-led franchise arguably the most potent side ever played in the T20 cricket.

Before IPL 2022, seven influential Indian players – Rohit Sharma, Suryakumar Yadav, Ishan Kishan, Rahul Chahar, Jasrpit Bumrah, and Hardik and Krunal Pandya – bolstered the Mumbai Indians (MI) squad. They maintained the core of their roster across some seasons, but considering the IPL’s retention policy, they were bound to go on different paths.

MI, the most successful IPL franchise with five titles, built a squad around Rohit, Suryakumar, Bumrah, and the six-hitting monster Kieron Pollard in the latest mega auction. Their most significant signing was Ishan Kishan, for whom they had splurged a record INR 15.25 crore. But they failed to acquire the other three as the Pandya brothers and Chahar joined different franchises at high stakes.

The principles of MI are simple. They believe recruiting the best possible overseas players is important but not defining. Their approach has always been synonymous with the team names, as they always focus on building a strong Indian contingent.

However, MI went on with a suspicious strategy at the 2022 mega auction. They had no chance to bring Hardik back, as he was drafted by Gujarat Titans immediately after they released them. But they did not sign Chahar either, who scalped 41 wickets in 39 matches across three IPL seasons at a reasonable economy rate. Instead, they roped in Murugan Ashwin, Mayank Markande, and Sanjay Yadav for the spin department. Surprisingly, they did not buy any specialist overseas spinner either, which has been wreaking havoc since the beginning of IPL 2022.

But the utter desolation of the squad has been created because of the absence of the Pandya brothers. The duo used to come at any place between No. 4 and No. 8 and could bat to stabilize MI, or sometimes, to finish things off in a flurry. Besides, they could bowl handy overs in the middle phase of the opposition’s innings.

Krunal bowls slow-left arm spin, while Hardik can clock 135 kph+ regularly. They gave options to Rohit, and the MI skipper fittingly got the best out of them.

Hardik joined the MI family in 2015 at INR 10 lakh. He now has a salary of INR 15 crore in IPL 2022. Besides, he has been leading Gujarat Titans (GT) brilliantly, winning seven out of the opening eight matches. This is exactly how much the stalwart has evolved in the last seven years.

Across seven IPL editions, Hardik played 92 matches for MI. He maintained a strike rate of over 166 there while scoring 1,476 runs. With the form he is in, Hardik might enjoy his best season this year but in MI colours, it was in 2019. He aggregated 402 runs at 191.42 in that edition, and also took 14 wickets to help them win the coveted trophy for the fourth time. In all, he got 42 scalps for them.

So Hardik’s loss in MI middle-order, of course, is practically inevitable.

Krunal, Hardik’s elder, joined the MI family at INR 2 crore a year after his brother’s contract. He now has a salary of INR 8. 25 crore in IPL 2022. It might not be as significant as Hardik’s but, without a doubt, lucrative.

Similar to Hardik, Krunal has been representing other debutants Lucknow Super Giants (LSG) in IPL 2022. He had remarkable six years at MI, where he represented 84 matches. He accumulated 1,143 runs there and picked up 49 wickets.

Krunal can be a pinch hitter, and also can be someone who has the ability to restrict the oppositions with the ball. His 147.37 strike rate this season after eight matches is equally astounding. Also, he maintained an economy rate of just 6. 78 runs for LSG to bag seven wickets so far.

MI may get their next Hardik and Krunal in the future in some others or may not, but what the duo chipped on a continuous basis can not be neglected. Teams do have transition phases at some point, and MI are in now. Their results in IPL 2022 are absolutely disastrous, losing eight out of eight matches, something one could have hardly imagined ahead of the season.

Questions have been frequently asked regarding MI acquisitions at the mega auction. They did not buy the fit and consistent Trent Boult, and instead, went on picking Jofra Archer, who will be available next season. They did not acquire many well-known Indian faces and rather got Tim David at INR 8.25 crore. But the most crucial thing they might have mistakenly done there was not getting replacements for Hardik and Krunal.

It will hunt them next season as well, if not beyond that.