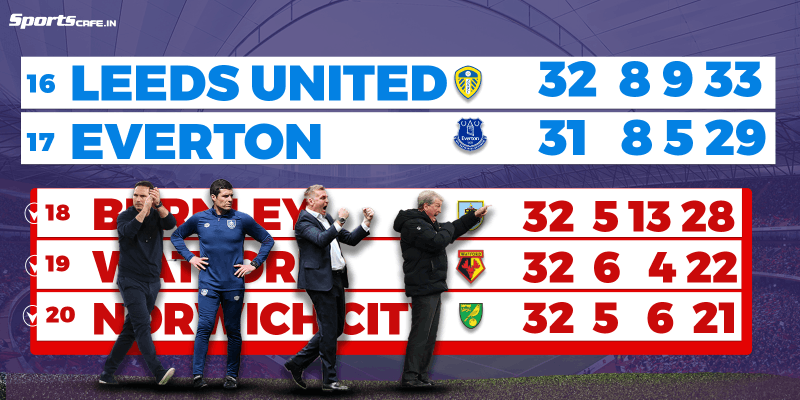 There’s absolutely nothing like a good, tasty relegation battle and right now, the Premier League has one of the best around. Five teams all battling it out for survival and only two will eventually make the cut and live to fight one more season while the other three bid the top tier goodbye.

Welcome to the Premier League, the greatest and most marketable football league in the country because it has arguably the two best teams in the world plying their trade. It’s where physical, tough-tackling footballers are born and where style and panache comes to die, especially in a relegation battle because that’s our focus. Five teams, two spots to survive and less than six games left on the cards for many although that count rises to seven for one.

Aston Villa and Crystal Palace are more or less safe, Newcastle United have surged past the drop while Brentford should survive the season thanks to big wins over Chelsea and Arsenal. Yet, we’ve still got Leeds United alongside Everton, Burnley, Watford and Norwich City battling against the drop. The Toffees and the Peacocks currently sit outside the drop with a supercomputer predicting that they will be the two to survive. Will they? Let’s see what could happen.

For Leeds United (16th) to survive:

Not exactly the greatest season for Leeds United as they were forced to sack their lord and saviour in Marcelo Bielsa while also appointing an American coach as a replacement. Has it all worked out in the end? Well, Jesse Marsch, the former RB Salzburg man, has tightened up things at the back and made the Peacocks far more pragmatic, which helps when you’re thrown into a relegation scrap.

But their main problem, as so aptly pointed out by that table above, is the fact that they’ve conceded 68 goals at this stage of the campaign. It’s horrendous reading and while things have improved with just one loss in their last five, that doesn’t help their cause in the near future.

Plus Marsch’s side have netted just 38 goals which once again, doesn’t help the cause. However, they do have both Patrick Bamford and Kalvin Philips on their way back from injury which should hand the American the boost he needs but then there’s that run of games.

Manchester City, Arsenal and Chelsea in three consecutive weeks doesn’t bode well and it could effectively see their five point gap dissolve to nothing should results elsewhere go against them. It’s why all Leeds United need to do is keep knocking about and winning not more points than Watford or Burnley or Norwich City but more than Everton.

It’s like the saying goes, “You don’t need to outrun the bear, you only need to outrun your friend” and in this case, that’s Everton. Better the Toffees’ results over the next month or so of the season, and the Peacocks live to fight another day.

Chances of surviving? A beautiful 86%

For Everton (17th) to survive:

Appointing Rafael Benitez, sacking Rafael Benitez when in a relegation battle and then handing the reigns to the very experienced Frank Lampard is all such Everton moves. And it hasn’t worked with the Toffees winning just two games since Lampard took over and still they’ve got the best chance of surviving the drop. One, because of the one-point gap between them and Burnley, and two because of the fact that they have seven games left in their season.

That extra game does add a little boost but their fixture list is not kind to them at all. Games against rivals Liverpool, Chelsea, Arsenal, Leicester City and Crystal Palace are all yet to come with Watford and Brentford potentially the only two winnable games.

It doesn’t bode well for Frank Lampard and his side but it’s made even tougher by the fact that nobody in their squad even looks up for the fight. They say they are and given that they’ve got Jordan Pickford, Michael Keane, Ben Godfrey, Abdoulaye Doucoure and a few others who have done this in the past, it should be easier.

But somehow, the attitude on the field is far rubbish and it could use a nice Big Duncan scream to perk the team up.  Add that to Dominic Calvert-Lewin and Richarlison’s droughts, injury issues and a defense that has struggled all season, you get Everton. Yet all that and all the Toffees need to do is better Burnley’s results whilst maintaining that tiny one point gap and they are safe to mishandle their money for another season.

Chances of surviving: A not impressive 57%

For Burnley (18th) to survive:

Oh, stupid Burnley, how stupid do you get? Sacking Sean Dyche with eight games left in a season and appointing Ben Mee, alongside U23s coach Mark Jackson, in the interim is nuts. But if it works, then they’re all lauded and treated as gods which on the back of a draw and a 2-0 win over Southampton, shows that things are moving towards a more positive angle even if they depend on others to survive.

But while the Clarets will be scrapping away and out of three sides in the drop zone, they’ve got the easiest fixture list over the next few weeks. Their toughest game will be Tottenham although they face Steven Gerrard’s Aston Villa twice while also playing fellow dropzone side Watford, gazillionaires Newcastle United and Wolverhampton Wanderers.

Yet their fate is not in their own hands as Everton currently sit with a one point buffer between themselves and the dropzone. All that means is what Burnley needs is simple; they need to win more games than Everton does and hope that the Toffees lose more games than they draw.

Because if they do draw all, seven, of their games left then the Clarets will need a minimum of nine points from their six games. That increases or decreases depending on the number of games Everton win or lose but that’s essentially the scenario.

Plus Goal Difference will also play a part as Burnley, currently, have a -17 GD which is better than Everton’s -19 and the Clarets also have the better Goals Against (45 to 53). Everton have the better Goals for (34 to 28) which means Mee and Jackson have to figure out a way to get Wout Weghorst and the rest scoring a lot more goals than just an average of two goals, or thereabouts, a game or else they could have even more problems.

If Burnley loses more than one game though, then Sean Dyche’s someone else’s Clarets will need to pray to the footballing gods for a miracle and a half. Or just hope that Maxwel Cornet scores his penalties although selling their soul to the devil might be easier.

Chances of surviving? A rather hefty 55%.

For Watford (19th) to survive:

Roy Hodgson is back but there are somethings that even the great Roy Hodgson can’t do and that is turn an absolute horror show of games into wins. Now the good thing for Watford is that the former Crystal Palace boss has tightened the ship which has helped their cause and that’s always nice. But with Manchester City, Crystal Palace, Leicester City and Chelsea in their run-in, things become tougher.

They will, however, need to beat both Burnley and Everton while earning at least 10 points from the other four to have even a small chance of surviving.  That would give them 38 points and that would be, as it stands, enough for a 13th place finish right now.

However, their recent form has seen them lose six out of nine games since Hodgson took over with three losses in their last three league games but they’ve won seven points. They’ll need to at least double that to have a chance of surviving while hoping that both Everton and Burnley don’t find their groove in order to leapfrog both sides into 17th place.

If the Toffees do manage to win their next two games, then Watford’s chance of survival is all but nil.

Chances of surviving? A barely visible 1%

For Norwich City (20th) to survive:

Now Dean Smith has done a decent job of giving the Canaries a fighting chance since his appointment in November but in his 22 games in charge, they’ve still won only four matches. That does account for 4 out of 5 wins they’ve had all season but things don’t get any easier from here on in because with six games left for them, they’re all must wins.

And recent form has shown that Norwich have improved with a draw against Brighton followed by a win over Burnley followed by a 3-2 loss to Manchester United. There’s fight left in them but they’ll need to eek out at least five wins to have any chance of leapfrogging Watford and Burnley, while also hoping that the Clarets, Hornets and Toffees all fail to win any football games. Only then will the Canaries have 36 points and be in with a shout of surviving.

Chances of surviving? Way less than 1%.