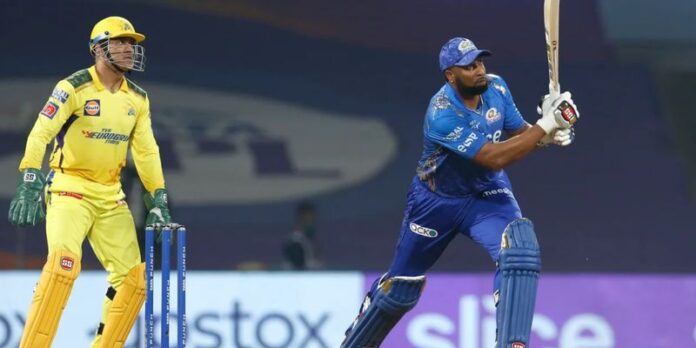 MS Dhoni has been known for his reading of the game and tactical intelligence he uses against the opposition players in international cricket and IPL. Dhoni once again showed his tactical awareness as Kieron Pollard was dismissed as he placed a fielder at un-orthodox position near the boundary line.

IPL 2022 has been a poor campaign for Chennai Super Kings but they have performed pretty well against Mumbai Indians so far. CSK won the toss and opted to bowl first against MI. They picked the wickets of the opposition consistently and are on their way to restricting MI on a low total. Kieron Pollard hit one boundary and a single six but was dismissed with a brilliant tactical move by CSK.

Mahesh Theekshana was bowling the 17th over of the innings and he bowled a flattish carrom ball to Kieron Pollard. Just before the delivery, Shivam Dube was placed very fine at long-on. Pollard rocked back to clear the ropes and took a big swing. However, Dube grabbed a clean catch at the boundary to send Pollard back to the pavilion. The spectators were seen praising CSK for the tactical masterclass they showed to send Pollard back to the pavilion.