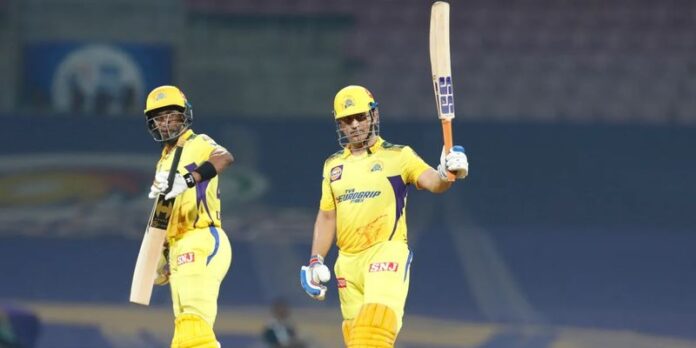 Chennai Super Kings captain Ravindra Jadeja has said that MS Dhoni still has the ability to play the role of a finisher and he is doing it for team after they won against Mumbai Indians by three wickets. Dhoni played a cameo of unbeaten 28 runs from 13 balls hitting the boundary to close the game

Chennai Super Kings have registered their second win of the IPL 2022 reviewing their horrendous start in IPL 2022. The team won against Mumbai Indians by three wickets with a collective effort. The chase of 156 got tough for CSK at one stage as they were losing wickets at regular intervals. Ambati Rayudu scored 40 runs from 35 balls in the chase and was looking in good touch. However, he lost his wicket and the team was poised on 106/6 at one stage with MS Dhoni and Dwaine Pretorious on the crease. Dhoni once again played the role of finisher for the team playing a cameo of uneaten 28 runs from 13 balls and helped CSK win the game by three wickets. Ravindra Jadeja praised Dhoni for his knock saying he still has that spark in him and can finish the games for the franchise.

“We were very tense the way game was going. But the great finisher of the game was still there, so we knew we had a chance. He’s still here and doing it for us,” Jadeja said in the post-match presentation.

Mukesh scalped three wickets with the new ball and was swinging it both ways. Dwayne Bravo picked a couple of wickets. The innings went well for CSK but they were a little sloppy on field missing several catches and a stumping. Captain Ravindra Jadeja praised Mukesh saying he has bowled well in the powerplay for the team. Jadeja also admitted that the team needs to work on their fielding.

“Yes, he (Mukesh) has bowled well upfront and done well for us in the powerplay. If you aren’t winning games, you still want to be calm. (On him dropping catches) It happens, that’s why I never take fielding for granted and practise hard. We need to work on our fielding, can’t afford to drop catches,” he explained.

Mukesh was awarded Man of the Match for his performance. Revealing his journey of the career so far, he revealed that he found interest in cricket at a boarding school in Pune. Mukesh also opined that the presence of star players in the team takes the pressure away from youngsters.

“I never thought I’d play cricket. Was at boarding school in Pune, we had an hour’s sports period and I used to play all kinds of sports there. Tried playing cricket and seemed to be good at it. Have to bowl well in the powerplay where I’m supposed to bowl three overs. There is no pressure actually, to play with such big players around you automatically takes all the pressure away. I just want to have a good time and enjoy myself,” Mukesh revealed in the post-match presentation.