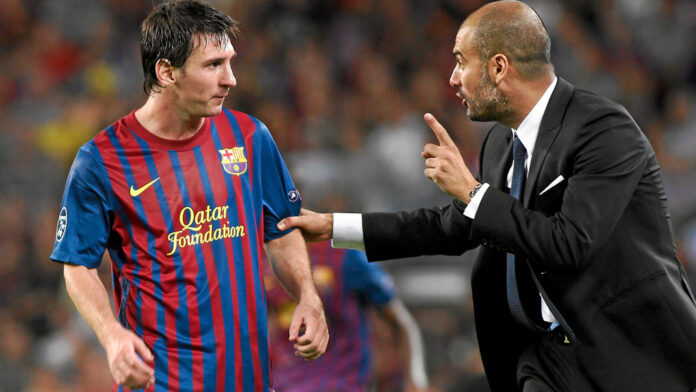 Former Barcelona boss Pep Guardiola has lavished praise on Lionel Messi and admitted that his Camp Nou side wouldn’t have won so many trophies had Messi not been there. The Spaniard spent four years at the Camp Nou and won every possible trophy available, including two Champions League crowns.

While Pep Guardiola is currently at Manchester City and Lionel Messi is at Paris Saint-Germain, the duo spent four absolutely fantastic seasons together at Barcelona. So much so, that Guardiola’s time at Barcelona will see him go down as one of the best managers in football history while the team is also considered to be one of the best ever. Because, during his tenure at the Camp Nou, the Spaniard won every trophy available including two Champions League crowns and three La Liga titles.

But while Pep Guardiola hasn’t experienced the same level of success in Europe since then, the Spaniard has continued winning trophies all over Europe. However, he believes that his time at Barcelona wouldn’t have been so successful had it not been for Lionel Messi. Guardiola also compared Messi to legendary Chicago Bulls’ basketballer Michael Jordan and admitted that he would have won trophies but never so many without Messi.

“What does Messi mean? Everything, everything, Messi is like Michael Jordan. It’s like when Phil Jackson could feel that feeling that everything was flowing and there were no problems. I owe him a good bottle of wine to thank him for the contracts he allowed me to sign!” Guardiola said, reported Goal.

“We had an amazing group of players who helped him when we were together at Barcelona in those four years. There were a lot of stars at the right time and the right age for everyone, with Xavi, Carles Puyol and Andres Iniesta too. There was unique chemistry. Without Messi, we would still have won. But, would we have won so much? No, impossible.”