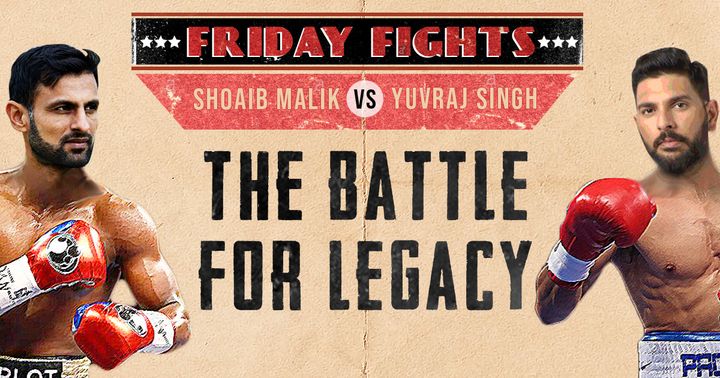 So it turns out to be another cross-border fight, as today, Yuvraj Singh and Shoaib Malik, two World Cup-winners and among the greatest match-winners for their countries, battle it out in the ring. Both are middle-order batsmen and very handy with the ball in hand. Let’s see who emerges victorious.

India, Pakistan, fight. Yes, grab popcorn, tighten up your seat belts and get ready for a blockbuster bout. Yuvraj Singh, a World Cup winner, match-winner on his day, sixer king, a man with a golden arm, one of the greatest Indian ODI players of all time, is all set to ignite fire against Shoaib Malik. A former Pakistan skipper, known for his cool and calm attitude, finishing touches, ability to accelerate innings flawlessly, provide his side breakthroughs and someone who excelled against arch-nemesis, Malik knows how to win Indians or battles against them.

So, let’s get ready for the fight as the audience can barely contain their excitement. They are going absolutely crazy as they understand the exhilaration that the battle in the ring promises today. Now, without wasting much time, let’s get straight to the battlefield.

ROUND 1 -> BATTING AVERAGE: Yuvraj gets underway

Yuvraj Singh has never been a stranger to getting off to fliers. Without wasting much time, he connects a straight forward punch to down Shoaib Malik as easily as he had flicked Brett Lee with the middle of his bat in the 2007 World T20 semi-final to send the ball into the stands. Yuvraj, with an average of 36.56, overpowers Mailk, who is too ice-cold to get off the blcoks and averages 34.56.

ROUND 2 -> BOWLING AVERAGE: As close as it gets

Now, this is the bloody intensity that the crowd has come here to witness. Shoaib is pretty warmed up now after the last round’s punch, which has awakened the giant within. He goes on a rampaging attack against  Yuvraj. Yuvi is also up to the task. He ducks it. He defends. He moves sharply. And just when Malik loses his balance slightly, as a result of his aggressive attempts to knock down Yuvraj, the Indian connects an uppercut. With an average of 38.68, Yuvi seals a closely fought round as the right-haner despite his best efforts, falls barely short with an average of 39.19.

Ice-cold who? Which guy has turned up for this round? He doesn’t seem to be the cool and calm Malik we know. Or perhaps he doesn’t like losing. Malik’s aggression had cost him the last round. But, he continues attacking Yuvraj and this time, there is no mistake from his side. Though Yuvraj was known for his hook shots, but here with an economy of 4.67, Shoaib HOOKS Yuvraj to the ground as his economy of 5.1 isn’t quite good enough.

Now, this was some strike by Yuvraj Singh. And does it surprise anyone? Hardly. The southpaw was always a sweet striker of the cricket ball. Here with a strike-rate of  87.68, he unleashes one jab after another to completely own Shoaib, who has no answers with a strike-rate of 81.9. The ‘Singh is King’ song plays in the background as a tribute for Yuvraj as such was his awesomeness in the round that has sent the whole Indian diaspora into a state of joy and ecstasy in the crowd.

ROUND 4 -> BATTING AVERAGE IN ICC TOURNAMENTS: Yuvraj, the man, the myth, the legend

Big ticket events, Yuvraj Singh and we all know the result. The left-hander was one of the vital cogs of India’s 2011 World Cup victory. He lit up the stage for India when it mattered the most and will forever be remembered for his performances in the megaevent. Unlike Shoaib, who had still not recovered from last round’s defeat, Yuvraj was up on his feet, like a lion, waiting to snarl his prey. He latches on to his opponent, goes on a rampage with an average of 44.56 and Malik is just clueless at 21.81, as Yuvi takes a 3-1 lead in the bout.

ROUND 5 -> BOWLING AVERAGE IN ICC TOURNAMENTS: Another Yuvraj masterclass

Just stop this now, Yuvraj Singh. You have no right to make Shoaib Malik look so bad in the ring. We do get that you thrive in the ICC mega events. But stop embarrassing Malik. Yuvraj, like a king with a bowling average of 27.04, shows no mercy whatsoever on Malik, who with an average of 29.66, is a no match to Yuvi as an uppercut is unleashed, connected and gets the Pakistan all-rounder down on the ground. This is pure annihilation now.

ROUND 6 -> WICKETS PER INNINGS: The crowd boosts Malik

Just as we thought that Pakistan’s Shoaib Malik is down and out and won’t be able to comeback in the bout, the unpredictable happens. Yes, that’s a Pakistan thing. The crowd starts clapping and roaring for Shoaib Malik, especially the Pakistan diaspora. All the loud cheers inspire Malik to get up, and finally counter punch Yuvraj successfully. The Indian cricketer, bullish, with his last few rounds victories, tries to attack once again. But, this time, Malik connects the counter punch and how. Yuvraj loses the round as he scalped 0.68 wickets per innings in comparison to Malik’s 0.72.

ROUND 7 -> FREQUENCY OF FIFTY-PLUS SCORES: You just can’t keep Yuvraj out

Boxing is as much about consistency as cricket. Not only do you have to get into ideal positions but also ensure that when you punch, it better connects and your competitor is down. But that has been lacking with the Pakistani all-rounder as he scores a fifty-plus score every 5.41 innings. On the other hand, Yuvraj, with a fifty-plus score every 4.60 innings, well known for his hook shots on the field, unveils the HOOK here too, albeit as a surprise weapon and connects it brutally to win the round. Consistently explosive, eh?

ROUND 8 -> NO OF BALLS BOWLED PER GAME : Malik goes BOOM

This might not have been a night to remember for the Pakistani but he will remember this strike for a long time. Jeez! This was some move. Where was Malik hiding it all the while? The Pakistani , as if he has nothing to lose, without much fuss, goes bonkers and tries to down Yuvraj with an uppercut and smashes the Indian cricketer with a lot of disdain. Malik, with 27.72 balls per game, easily outplays Yuvraj, who bowled 16.6 balls per game on an average.

ROUND 9 -> BOWLING AVERAGE AWAY: This is Yuvraj’s world

Yuvraj’s name might mean a young king in India. But he’s a seasoned king, who was born to rule the cricketing world and now the boxing ring. Despite a few loses here and there, he has certainly not lost his midas touch. And this is a tribute to Wladimir Klitschko as he uses the Steelhammer Right Hand to knock-out Shoaib Malik like a pro. Malik just can’t get up as he has been forced to experience stars in the daylight. With a bowling average of 36.79, Yuvraj blasts Malik who had an average of 37.98. Comfortable win for Yuvraj.

Ask the bowlers around the world and they will attest to what a dangerous proposition Yuvraj Singh was whenever he was in his trance zone. Today, we witnessed that he can be as good in the ring too. We expected a close Indo-Pak fight in the ring but we had a surprise in store as Yuvraj was simply unstoppable all throughout the bout and made Shoaib Malik dance to his tunes. There were glimpses of some fight from the Pakistan all-rounder but it wasn’t enough as he couldn’t sustain the intensity, passion, skills and mastery that Yuvi exhibited. The Indian all-rounder Yuvraj emerges as the clear winner between the two. But for some more epic clashes in the ring, keep reading SportsCafe as we will be back with a new rivalry and fight next week on Friday.

Where to bet on politics online: the best Online Betting Sites Politics Even though it's advised that we keep politics out of the workplace and...
Read more
Betting Tips

How to utilize the "lay the draw strategy" and when to do it Laying the draw back has gained popularity since the early 2000s and...
Read more

Have you ever thought about playing and winning at an online roulette game? If you do, you must know how to play this game....
Read more