Reports | PSL 2021 Likely To Resume In Early June; Karachi To Host The Games 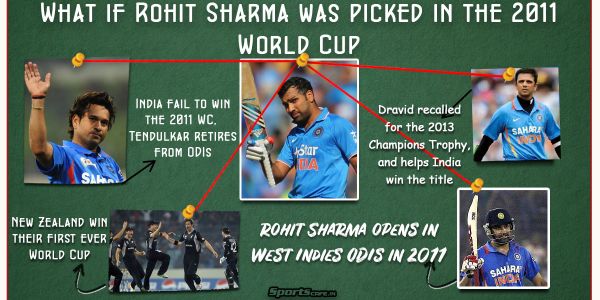 One of the biggest heartbreaks for Rohit Sharma in his international journey so far has been missing out on the 2011 World Cup that India won after a gap of 28 long years. One of the greats of limited-overs cricket now, Rohit wasn’t picked in what was the first World Cup in India since 1996.

It doesn’t get bigger than playing a 50-overs World Cup, arguably the biggest cricketing extravagant, closely watched by the whole world. Even the non-cricket fans take a keen interest in the ICC mega event as it’s the most talked about event at the time of it’s happening and has the potential of making superstars for eternity. And a World Cup in India is as crazy as anything with the madness that the cricket-loving country brings to the plate.

So this is 2011. We are just a few months away from the hustle and bustle of the much anticipated World Cup. This is supposedly Sachin Tendulkar’s last shot at the ICC silverware after an innumerous failed attempts since 1992. The whole of India has turned into one, a mad bunch, wanting the national team to win the world and the World Cup in front of their eyes. India finally announce their squad for the mega event, and decide to pick the supposed next big thing in world cricket – Rohit Sharma over the seasoned Yuvraj Singh.

Rohit had got two centuries in the last one year while Yuvraj had got two in the last 40 ODIs he had played for India and just two fifty-plus scores in the one year leading up to the World Cup. With Yusuf Pathan already establishing himself as more than a decent bowling option with 12 wickets in as many games in the last one year and the likes of Virender Sehwag, Suresh Raina and Rohit Sharma there in the side to roll over their arms, India didn’t feel the need of the southpaw. Also, IPL numbers proved to be a game-changer in Rohit’s selection as it mattered a lot in the team selection. And the right-hander had shone through with 404 runs at a strike-rate of 133.77 in the last edition, finishing in the list of top ten highest run-getters while Yuvraj didn’t even feature in the top 30.

India starts off well and so does Rohit Sharma as he makes a fifty against England in the middle-order but then keeps making 30s and 40s throughout. But in the encounter against South Africa, he gets promoted to no.4 after India get off to a dream start, so that he finally can get a big score under his belt. And the Mumbaikar makes a 45-ball-70 to help India score 360. As a result, India win the game quite easily. Also, one of the things happening in the tournament is that India are forced to play five bowlers mostly as the likes of Yusuf Pathan and Rohit Sharma fail to effectively combine for the quota of the fifth bowler.

India have a terrible game against West Indies as batting first all they make is a below-par total of 201 runs with only Virat Kohli making a fifty. West Indies outplay India but still the Men in Blue end up with nine points in the group stages and that locks their date against New Zealand in the quarter-final. This is considered to be a cakewalk for the Indians. But then batting first, New Zealand hammer 270 with the help of a blasting century from Ross Taylor.

India get off to a good start with both Sachin Tendulkar and Gautam Gambhir making fifties each but from 110-1, pretty much like the 1996 World Cup semi-final, Indian batsmen get blown away like a pack of cards after the dismissal of Sachin. New Zealand stun the MS Dhoni-led side. India get knocked out. Sachin Tendulkar announces his ODI retirement in the aftermath of the loss that has sent the entire nation into a shock. But as it turns out, India lost to the eventual winners of the World Cup as the Kiwis from a darkhorse finally turned into champions.

After the World Cup, Yusuf Pathan gets axed from the side immediately for the West Indies series under the captaincy of MS Dhoni as he had a horrendous World Cup. The likes of S Badrinath and Manoj Tiwary are picked after their IPL displays. Robin Uthappa is named as a replacement for Gautam Gambhir at the eleventh hour. Venugopal Rao also gets a call-up after having last played for India in West Indies in 2006 as he had exhibited quite a few impressive cameos in the 2011 IPL and also averaged 48.25 with a strike-rate of 90.61 in the last edition of the Vijay Hazare trophy.

Dhoni decides to slot in S Badrinath and Manoj Tiwary in the middle-order given their great run of form. Given the intense fight for the slots, MS decides to open the batting with Shikhar Dhawan, and Rohit Sharma is picked ahead of Robin Uthappa as he has been in good touch in the IPL. And the classy batsman makes the series his own, finishes up as the leading run-getter with India clinching the series easily. Also, Manoj Tiwary impresses one and all.

For the England ODI series, India persist with the opening combo of Rohit and Dhawan despite the latter failing in Windies. There is the temptation to pick Rahul Dravid in the ODI side after his great Test run but it doesn’t materialize. Rohit continues his good run. But, given the senior stature of Gautam Gambhir and Virender Sehwag, whenever they return to the side, the Mumbaikar gets demoted to no.3, still maintaining his place in the top-order setup.

But finally, when the squad for the 2013 Champions Trophy is announced, India are made to take some tough calls. They show the exit door to the likes of Gambhir, Sehwag and Harbhajan Singh, who were part of India’s failed campaign in the 2011 World Cup. And they decide to bring back an already retired Rahul Dravid that sends the whole nation into a meltdown. The move is masterminded by MS Dhoni, the biggest gambler in India since time immemorial. The BCCI and the Indian skipper convince Dravid that it would be his last international appearance and the selfless man, like always, is ready to do what the team requires him to.

Notably, Rahul Dravid just had a great 2013 IPL season where he had made 471 runs and it was the second consecutive season when the senior batsman had finished among the top 10 leading run-getters. Moreover, no one in the history of Indian cricket had batted better in England than Dravid. He was the highest run-getter on the UK shores with 1,114 ODI runs in 27 innings at an average of 50.63.

Given the brilliant shows by Dinesh Karthik in the practice games, he forces his way into the XI albeit as an opener given the middle-order is packed and has no vacancy. Not to forget, he was very successful in the IPL batting in the top-order with 510 runs, a few months back. Rahul Dravid is slotted at the no.4 position. Rohit fires with the bat and so does Karthik as they take their Mumbai Indians camaraderie to the highest level.

Dravid also chips in with fifties against South Africa and West Indies respectively. But, the semi-final game against Sri Lanka turns out to be a tricky affair when India get reduced to 10 for 3 in the chase of 205 runs. But Dravid uses his full experience as he makes a brilliant 80-odd and masterfully bats with even the tail to help India to a memorable win by two wickets to reach the finale. Dravid proves his selection right and how brilliant a mind MSD has. MS knew that on the tricky English tracks a solid technique will be needed than just the flair and ability to score quickly.

But the whole of India await the CT finale. The final hurrah for Dravid. India’s best chance to win an ICC mega event since the 2007 WT20. Batting first, India plunder 265 on the back of solid fifties from the bat of Rohit Sharma, Virat Kohli and Rahul Dravid. After that, Bhuvneshwar Kumar proves too hot to handle for the Three Lions as he runs through the English batting as India win the final in a rather one-sided manner. MS Dhoni lifts his second ICC trophy while Dravid gets a fitting farewell as he not only ends up on the winning side but is also adjudged the Man of the Tournament for his incredible show. Something that even his peers Sachin Tendulkar, Sourav Ganguly, Anil Kumble, and VVS Laxman couldn’t achieve, as Dravid climbs the podium to thank the Indian skipper for trusting in him at the age of 39.

Post the successful debuts of Ishan and Suryakumar, Sachin Tendulkar has opined that IPL’s introduction has made the Indian stars ready for the world-stage...
Read more
Football

Indian left-back Sanjeev Stalin has joined ISL outfits Kerala Blasters FC on a three-year contract, with the deal set to keep him at the...
Read more
Cricket

Prasidh Krishna, who was selected in the Indian ODI team for the England series, has stated that he is looking forward to rubbing shoulders...
Read more
Cricket

After impressing the selectors with their Vijay Hazare Trophy run, Suryakumar Yadav and Krunal Pandya have been named in the 18-man squad for the...
Read more

Post the successful debuts of Ishan and Suryakumar, Sachin Tendulkar has opined that IPL’s introduction has made the Indian stars ready for the world-stage...
Read more
Football

Indian left-back Sanjeev Stalin has joined ISL outfits Kerala Blasters FC on a three-year contract, with the deal set to keep him at the...
Read more
Cricket

Prasidh Krishna, who was selected in the Indian ODI team for the England series, has stated that he is looking forward to rubbing shoulders...
Read more
Cricket

After impressing the selectors with their Vijay Hazare Trophy run, Suryakumar Yadav and Krunal Pandya have been named in the 18-man squad for the...
Read more
Cricket

Reports | PSL 2021 Likely To Resume In Early June; Karachi To Host The Games

On March 4, the increase of COVID scares in the PSL camps prompted PCB to postpone the tournament to a later date, which now...
Read more

Following England’s close defeat against India, Ben Stokes has reckoned that the Three Lions want to make a habit of winning games in pressure...
Read more

Shastri And Kohli’s Aggression Has Made A Massive Difference To This Indian Team, Feels Rameez Raja

Former Pakistan skipper Rameez Raja believes that Ravi Shastri was a misfit in the Indian team back in his days and that inherent aggression...
Read more

Nasser Hussain has stated that England's middle-order needs to be looked at after the left-handed packed side succumbed to Shardul Thakur's off-cutters to concede...
Read more

Indian left-back Sanjeev Stalin has joined ISL outfits Kerala Blasters FC on a three-year contract, with the deal set to keep him at the...
Read more

Prasidh Krishna, who was selected in the Indian ODI team for the England series, has stated that he is looking forward to rubbing shoulders...
Read more

After impressing the selectors with their Vijay Hazare Trophy run, Suryakumar Yadav and Krunal Pandya have been named in the 18-man squad for the...
Read more