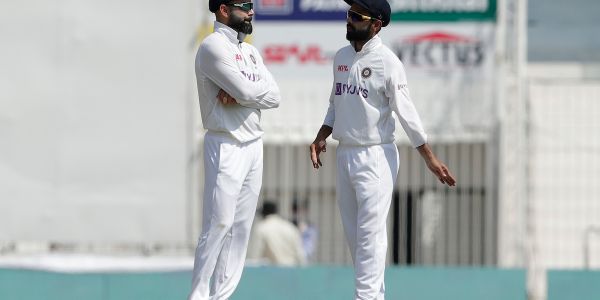 Joe Root. Chennai. This connection is turning special with passing time. After making a historic 218 in what is his 100th Test, he takes an absolute jaffa of a catch to help England with the wicket of India’s Test vice-captain Ajinkya Rahane as India are reduced to 73 for 4 in a mini-collapse.

English skipper Joe Root is having that sort of Test that whatever he touches turns into gold. This year he has been in maddening form. It is as if he wants to make up for all the wrongs he has done in the last couple of years. It is like he’s answering each one of his critics who were questioning his batting, captaincy or status in fab four.

So it is the 27th over. Ajinkya Rahane who has been in great form in the last few Test series comes out to the crease. India are still getting in terms with the fact that Virat Kohli who was averaging 344 against spinners in India since 2018 has got out to a rookie Dom Bess. But why panic when India’s two specialist Test batsmen Pujara and Rahane are in the middle. Rahane likes to show his presence with positive intent at times.

He advances to Dom Bess, takes the ball on the full. It looks like he has timed the ball well enough in first glance and it will go to the left of the fielder at cover. He has middled the ball after all. It is still in air though. But wait, what? The catch has been taken. The fielder at cover has made a full outstretched dive to his left to hand on to the ball with one hand and take a stunner of a catch. Rahane is still standing in disbelief.

And it’s Joe ‘Superman’ Root who has done it again. Is there anything he can’t do this Test? English fielders are running towards him. There is joy all around.