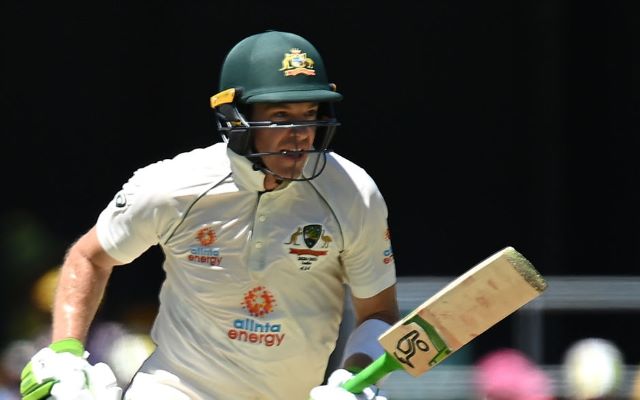 In just over a month we’ve seen India and West Indies script history at the Gabba and Chattogram respectively, but Tim Paine, today, might have eclipsed both those achievements. The Aussie skipper casually sent down some filthy off-spin and managed to dismiss Hurricanes’, Thomas Rogers.

Tim Paine has been in the firing line of late and, in a way, he has no one but himself to blame for it. He opened his mouth with ‘See you at the Gabba mate’ comment – which has since become infamous – and also endured a horror tour behind the wickets. He ensured that he will be known as the Aussie captain who lost twice in two years to India on home soil and two weeks ago, even got mocked for carrying drinks for Hobart Hurricanes.

So today, the Aussie Test skipper unwinded by playing some good ol’ club cricket. Paine represented ‘University of Tasmania’ in a Cricket Tasmania Premier League game versus North Hobart and enjoyed himself. Paine did not have a great outing with the bat, scoring 9 (13) opening the batting, but the 36-year-old, regardless, made the headlines. No, not because he ran his mouth. You wouldn’t believe it, but yes, Paine became an overnight star for his bowling shenanigans.

The Aussie skipper, remarkably, took the new ball for his side and started off with inswinging trundlers. His radar was off, for most of the deliveries drifted towards the pads, but, nevertheless, the ‘talent’ was evident. But while seam bowling was fun, it was the genius move to shift to off-spin that yielded Paine rewards.

He had to wait till his 10th over but just as his spell was about to come to an end, Paine struck. Coming around the wicket, the Aussie Test skipper, on the 57th delivery of his spell, delivered a rank short one that turned away from the batsman Thomas Rogers. It was the kind of delivery which any batsman would want to dispatch out of the ground and so, as soon as he saw how bad it was, Rogers went for a wild hoick towards mid-wicket. However, to his dismay, the Hurricanes man did not connect the hit cleanly and instead ended up sending the ball straight to the hands of the fielder at long-on.

Thanks to the botched hit, Paine had a wicket to his name and the Aussie skipper, who could not believe his own luck, put his hands up in the air to celebrate. Beware, folks. There is a new all-rounder in town.