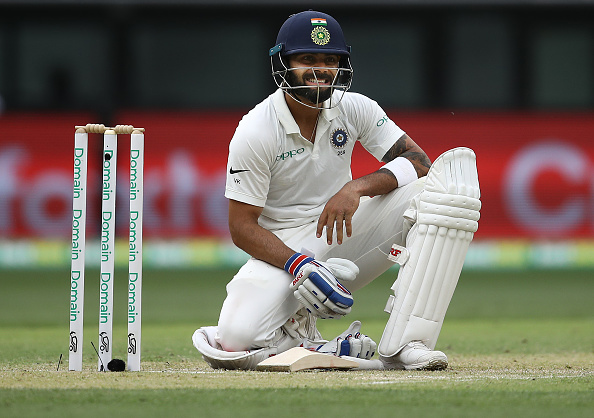 During the first Test, Virat Kohli had walked up to the umpire, asking him about England batters running approach, closer to the danger mark. However, in the second Test, the umpire handed the Indian skipper a warning for stepping on the danger mark during the third day at the Chepauk.

On Sunday, former England skipper Michael Vaughan stated that the Chennai pitch isn’t fit for Test cricket and called it a beach in the grab of a cricket ground.

SC Take: You cannot ignore Michael Vaughan, can you? Waking up to a horrific batting performance by England did not cheer up the former skipper, although he did decide to justify the debacle over breakfast. What better way to divert the failure than to put the blame directly on the pitch, which according to Vaughan was a ‘shocker’ and an ‘unprepared one’ and a ‘beach’. Albeit not even a soul was nearby to point out to him that India had actually scored 329 runs on the same pitch a day earlier, with the Englishman even taking to Twitter to laud the efforts of Rohit Sharma’s brilliant century. Indian fans took the privilege of taking a dig at the former cricketer on a cozy Sunday.

Even if that comment backfired, he could have abstained further embarrassment by not playing the ‘produce whatever you want at home to gain an advantage’ card. It drew immediate attention from one of the greatest spinners – Shane Warne, who refuted the statement. Maybe, Vaughan could have peeped at the scorecard of the second Test during India’s tour of England, in 2018. James Anderson and Stuart Broad made merry on the ‘green top’. Was Michael Vaughan’s Twitter handle deactivated back then?

Monty Panesar needs to do homework before making comments

If the Indian lose the second Test, it would be the end of Virat Kohli’s captaincy, claims Monty Panesar.

SC Take: To put things into perspective, there hasn’t been a complete batsman other than Kohli in the modern era, while his extraordinary stats have set our expectations sky-high. He also boasts of maintaining a stupendous record as a captain, especially in Tests, currently the most successful for India, with 33 wins in 58 Test matches. Former cricketer Monty Panesar felt that Virat Kohli should be axed from his leadership duties if India lost the second Test in the ongoing series against England after the Indian lost just the 2nd Test of his career as a captain at home. Ridiculous, isn’t it?

Agreed, that Ajinkya Rahane is back from a historic Test series win as skipper from Australia, but we cannot deny the facts. Australia were the last team to achieve the feat when Steve O’Keefe bagged 12 wickets to tumble the hosts on a tricky Pune pitch. India’s dominance at home can only be compared to Steve Waugh’s unit, which was hardly unhurt at home during the early 2000s. Detractors will justify themselves from all corners, but we need to learn to defend the man who has overseen the cricket team to grow as an unstoppable force.

Nazmul Hassan slammed Bangladesh captain and coach over team selection after the team lost its second consecutive Test to Bangladesh to concede the series.

SC Take: Bangladesh’s policy of churning out positive results by preparing spin-friendly wickets at home, is well documented in the past, but what they haven’t realised is the fact that away teams have now prepared a blueprint to break the code. The recent loss to a second-string West Indies side is evident how their successful strategy has backfired. But, why is the Bangladesh Cricket Board (BCB) President Nazmul Hassan complaining over poor team selection, having lashed out at their captain and coach?

This was coming and Bangladesh cannot pretend that they weren’t aware of it. Bangladesh have failed to mature as a Test-playing nation. Period. While they have improved leaps and bounds in limited-overs cricket, the longer format doesn’t seem to attract them too much. The domestic structure breathes on limited-overs leagues like the Dhaka Premier League and the Bangladesh Premier League, while a similar effort is missing in the National Cricket League – the breeding ground for the longer format. There’s no escape from reality until the above-mentioned gap is bridged.

Referees are humans, they have flesh and blood

SC East Bengal officials continue to crib regarding the quality of refereeing.

SC Take: We can’t deny that poor refereeing has been the hallmark of the ongoing Indian Super League, with the officials often finding themselves under the scanner. But, the repercussions have been abnormal, to say the least, with the coaches stooping low to an unbearable level to voice their protests. SC East Bengal was denied a genuine penalty during their game against Hyderabad FC, earlier this week, which evidently flooded the social media with hate messages from the fanatics. As keen followers of the beautiful game, we should take into account that we are not privileged enough to have Video Assistant Referee (VAR) nor that humans tend to make mistakes.

What’s more unfortunate is the way high-profile coaches have reacted to the same, with Robbie Fowler handed a five-match ban for racist comments, while Stuart Baxter got himself sacked by Odisha FC over sexual violent remarks made a few days back. No wonder we are going to face such issues until VAR is introduced in the ISL. Even Arsenal’s David Luiz was sent off in a bizarre way, but their rage was limited to a decent level. Yes, Indian football needs to grow a lot.