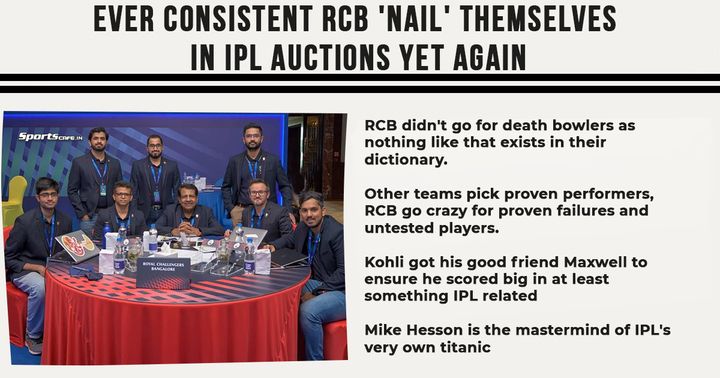 Ever been rejected by your crush? Experienced a break-up? A heartbreak? We all have and got used to it as well. What helps is that we simply move on after a while. But ever been an RCB fan? If not, it’s a stunt performed by highly trained professionals under expert supervision.

Please don’t try this at home or anywhere else. Can have serious consequences. You can move on from a girl but not from forces of nature and gifts to humankind like Virat Kohli and AB de Villiers and in turn, RCB, if you are a fan of both. No wonder being an RCB fan is a recurring spell of heartbreak which one experiences year after year. No wonder even break-ups feel better than being an RCBian.

Imagine having an open wound (the pain is inversely proportional to the number of IPL titles RCB have won), and despite that going in close proximity (hopeful at the start of the season) to a pedestal fan with red chili powder around? Result – Pain, pain and only pain. That is what you get being an RCB fan. We are dead from inside. As dead as MS Dhoni was after captaining listless Indian pacers during his times. Only silver lining being our own life’s fu** ups seem far meager when we see our beloved team in action.

But after last year, RCB fans were realistically hopeful given their improved performance, selection and players management in the 2020 edition. But, literally no one walks on the path of ‘Being True to Yourself’ (fu** ups) as the RCB does. And they nailed themselves literally in the auctions with one masterstroke after another.

First things first, after releasing Chris Morris and Isuru Udana, both known for their death bowling, there was a need for a quality overseas pacer who can do well at the death. But RCB didn’t go for death bowlers since nothing like that exists in their dictionary. After all, who can forget how they tried to make a death bowler out of Corey Anderson. RCB aren’t an IPL side, but a laboratory for failed experiments. They shelled out a whopping 15 crores for an unproven Kyle Jamieson and backed out of the race for a far better Jhye Richardson too early. What a masterstroke. Slow claps.

Kyle Jamieson, Daniel Sams and Kane Richardson. One common thing about the trio of the RCB’s foreign pace contingent is their out of the world economy rate at the death. Which can spell doom and death for their own team than opposition if their track record is considered. They have an economy rate of 9.12, 9.45 and 10.01 in the 16-20 overs time-period. Moreover, the 15 crore buy Jamieson has merely bowled 16.2 overs at death all his life in the T20s and since 2020, has given away 68 runs for one wicket in six overs in the phase.

His overall economy rate of 12.57 after the first two T20Is against Australia in the ongoing series, however, proves that he is a perfect RCB material as higher the economy the more chances of a player getting into the mix of things for the Bangalore-based franchise. Perfectly, in accordance to the rule #39 from the book “RCB – 100 ways to disaster in the IPL”.

Not only unproven players but RCB have a thing for proven failures too. Case in point: Glenn Maxwell and Daniel Christian. In the last five IPL seasons, the Big Show has proved to be a mega failure, as only once has he even crossed the 200-run-mark. But RCB went all-out for him. Maybe, it was Virat Kohli’s helping hand to his good friend Maxwell. At least, he ensured that Maxwell scored big in something IPL related. But the RCB jinx seems to be impacting him in a big way, as earlier, he was, at least scoring in non-related IPL T20s but now has got scores of 1 and 3 in the ongoing series against New Zealand too. Would be interesting to see which force emerges as the greater one, the great RCB jinx on Maxwell or Maxwell IPL’s jinx when he takes the field for the Red Army.

The 37-year-old Daniel Christian might well be a title magnet but RCB is one of the biggest failure magnets in the IPL history, so if that was the reason for his purchase, it was again a masterstroke albeit with slow claps, fellas. He’s also a proven IPL failure with a sub-par average of 17.15 and a SR of 119.25 after 34 innings.

Similarly, RCB also got Mohammed Azharuddeen and Sachin Baby. Azharuddeen, barring that incredible century against Mumbai, didn’t do too well either in the SMAT 2020/21 or the ongoing Vijay Hazare trophy thus far, again, barring one cameo. Also Sachin Baby has a poor IPL record. But that’s certainly not the real reason behind their selection.

Sachin-Azhar. Connect the dots. This is done for providing a full retro 90s feel to the fans and a lot of defeats. Now you know why RCB are so famous despite their listless shows over the years. They secretly serve nostalgia merchants as well even if these players just have these names and are no way near the quality or pedigree required for the cash-rich league.

And not forget, the mastermind Mike Hesson. The RCB management and Hesson were dreaming that they could get Morris under 10 crores. Yes, Morris, a good lower-order finisher, good with the new ball, great at the death. So they released him but didn’t want the world to know about it. So, Hesson cooks up a very sellable and believable fitness story. We buy it too. But then RCB go bonkers for Morris in the auction. The same Morris they didn’t retain owing to his fitness at a relatively better price. RCB’s secret is out now in front of the world, but let’s pretend we didn’t know anything. Let Hesson be the mastermind of the IPL’s own titanic.

Despite the additions in the RCB unit, the batting still looks as Kohli-ABD centric as ever. The bowling looks promising but with gaping holes. Over the years, sides pick players according to the needs of the team and utilize their strengths. RCB pick big names first, and then ask them to do things which aren’t even their strengths because RCB is RCB, they sign players first and then think later. There needs to be laughing stocks too in a tourney right? So, let’s give it to them for that, at least.

Or it’s hard to fathom how can they release a gun all-rounder like Chris Morris after how well he did? Or release as many players as they did this year despite a very decent side and performance last season. Even overall in the IPL History, not many teams would release gun players like KL Rahul, Quinton de Kock or Shimron Hetmyer. Misusing a certain Shane Watson in lower-middle-order when he had tasted immense success as an opener and given the task to bowl at the death. But, all these are classic RCB masterstrokes, which has immensely contributed to them winning a grand total of zero IPL titles.

For RCB, a team should only have Virat Kohli and AB de Viliers, and that’s enough as nothing else matters. As others play to win, RCB play to entertain their fans. And the Red Army fans don’t quite care about wins too. Or else they would have turned Blue Army fans by now, since RCB aren’t winning the IPL title for at least next 30-40 years. Period.

Roulette is considered one of the most popular casino games and is made available at almost every casinos online USA, offline or online. Roulette...
Read more