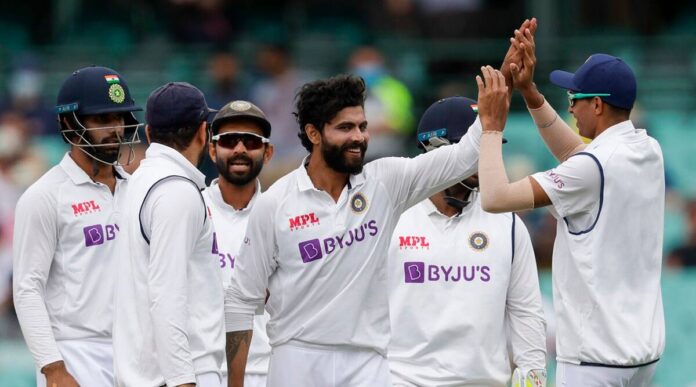 Ravindra Jadeja, who suffered a finger injury during the third Test against Australia in Sydney, has been reportedly ruled out of the remainder of the Test series and will not join the Ahmedabad bubble as originally planned. He was sent to the NCA in Bengaluru for ‘further management of his injury’.

Over the last few years, Ravindra Jadeja has grown in stature to become one of the most important members of the Indian Test side, especially in home conditions. However, he was ruled out of the first two Tests in Chennai after dislocating his thumb during the Sydney Test against Australia. He was subsequently ruled out of the Brisbane Test was sent to the National Cricket Academy (NCA) in Bengaluru for ‘further management of his injury’.

However, Cricbuzz now reported that his injury hasn’t recovered enough for him to take any part in the third and fourth Test and he is all set to set out for those two games as well. Jadeja was supposed to reach Ahmedabad early for the mandatory quarantine to be ready to join the full squad but now, in all probability, that is shelved. An official confirmation is awaited.

In Jadeja’s absence, India decided to go with Washington Sundar as the batting all-rounder as Axar Patel suffered a knee injury in the last moment. With Ashwin and Shahbaz Nadeem bowling in tandem with Sundar, the side had not a lot to offer in terms of variations. Kohli conceded that India will think of the combinations ahead for the second Test.

“There are no regrets whatsoever on that decision. Moving forward, we will think of the combinations which bring us variety as a bowling attack, and not one dimensional, turning away from the bat.” the India captain said in reply to a query on Kuldeep.

Interestingly, there are reports that Axar Patel has been recovered fully and joined the nets. He is one of the players, who could get the nod ahead to make his Test debut in Chennai.