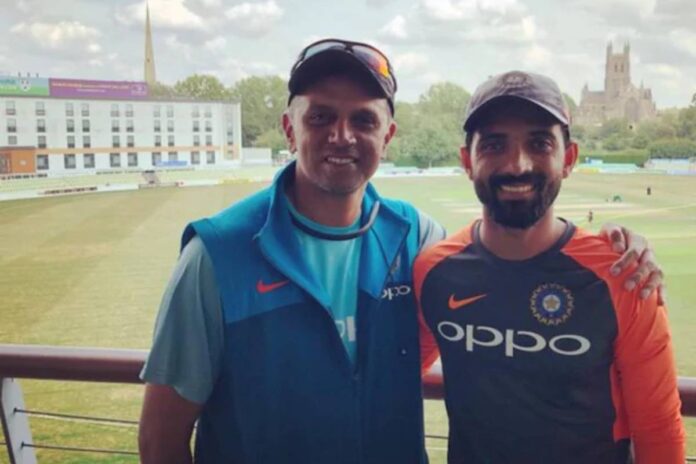 India’s Test vice-captain Ajinkya Rahane has lauded the role played by Rahul Dravid in the development of the youngsters coming through the system. He also revealed that Dravid had messaged him after his memorable ton at the MCG and also expressed how proud he was after the Gabba win Down Under.

Rahul Dravid is considered the silent warrior of Indian cricket. After the conclusion of his playing career, he didn’t take more popular roles and went to coach Indian junior teams at the grass root-level. He has coached India’s U-19 sides and also India A and now is in charge of the NCA. And now the result of that is for everyone to see as most of the youngsters coming through at the top-level have been coached by the former great of India, with many of them even sharing his influence in their respective developments.

India’s stand-in-skipper on the tour of Australia and team’s vice-captain, Ajinkya Rahane, talked about the massive role played by Rahul Dravid at the junior level and how big an impact it has had on the senior team. He named players like Mohammed Siraj, Navdeep Saini, Shubman Gill, Mayank Agarwal, who have benefited from the legendary batter.

“Rahul bhai plays a very big role. He was with the Under-19 team, then he was with India A, and now he is with the National Cricket Academy. (The system) has helped Mohammed Siraj, Saini… They have been on their toes and they did so well. Shubman Gill also, Mayank Agarwal… Before joining international cricket, he did so many tours with India A, got runs at the domestic level. So, I think Rahul bhai’s role was massive,” Rahane told Indian Express, reported HT.

He also revealed how he has been in constant touch with ‘The Wall’, adding that Dravid messaged him after his MCG ton and the historic Test win at the Gabba.

“We used to go to NCA before lockdown… and if a guy like Rahul Dravid is there, you learn something every day… We talk over the phone, exchange messages. He messaged me after the Melbourne match and immediately after the Brisbane match, saying how proud he was of the team,” he added.