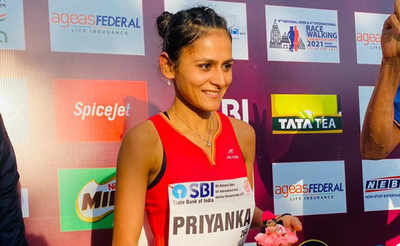 UP girl Priyanka Goswami scripted a new national record in the 20km walk event and subsequently qualified for the 2021 Tokyo Olympics. Apparently, the athlete was groomed as a gymnast till the age of 8 but later shifted her focus to track and field events, which had a drastic effect on her career.

Race walking has not been one of the talked about disciplines in Indian sports, but the fact that one of India’s long-standing athlete created a new national record in the 20km event and qualified for the 2021 Tokyo Olympics, must be taken note of. UP-based athlete Priyanka Goswami created a new record by clocking 1:28:48 during the 8th open national and 4th international race walking championship in Ranchi on Saturday and will be heading to the mega event in July, later this year.

“I had made up my mind last year when I missed the event by a narrow margin of 36 seconds. It was then that I decided to make it to the international meet this year. Luckily, I got two qualifications (World Cup and Olympic). I am not able to believe this is true as I am emotionally overwhelmed. Now, I want to win gold for my country,” said Priyanka, as reported by TOI.

Priyanka broke Bhwana Jat’s record of 1:29:54 to script her name in the history books. Having joined the Railways in March 2018 via sports quota, she has won two Silver medals at the national level in that season. Following which she registered a Gold medal in the all-India railway competition (2018) and also participated in the World Walk Championship in Italy (Rome) and in Asian Walk Championship Japan. Surprisingly, Priyanka was groomed as a gymnast till class 8.

“I was being groomed as a gymnast till Class 8… but after a two-year break, I got inclined towards track and field events at the age of 12. During childhood, I failed many times but didn’t give up and neither my parents nor my principal Usha (at Seth BK Maheshwari Inter College, Meerut) lost hope. She’d allow me to attend classes once a week so I could train myself,” added the athlete.