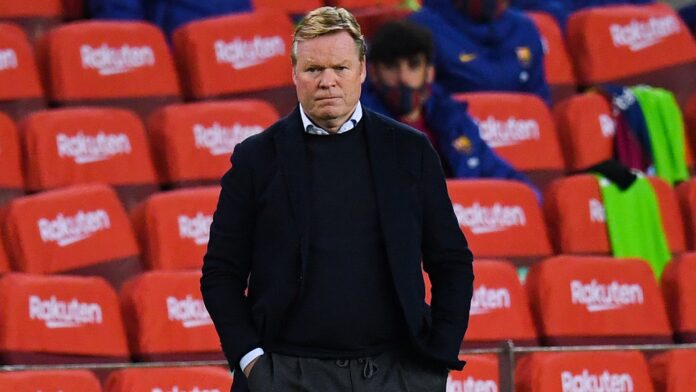 Ronaldo Koeman has insisted that football’s governing bodies need to take a long hard look at the fixture schedule before they kill players via their immense workload. The Barcelona boss has said this in light of the fact that his side will play seventeen games before the end of February.

Because of the coronavirus pandemic, football shut its doors for nearly three months with the game only restarting in late June. That meant that the 2020/21 campaign started late and with the season forced to be finished before the Euro 2020 begins, things have been rushed to say the very least. It has seen English sides play almost twice a week, especially since the turn of the year with things in Spain no worse.

Barcelona have already played ten games since the start of 2021 and have seven more fixtures before the month of February is over. That has seen Ronald Koeman admit that he hopes UEFA or the La Liga will eventually start to think “about the number of games” teams are playing because it is “killing the players.” He further added that “it is difficult” especially for the big teams because they’ve got “three competitions” to play in.

“It is difficult. The number of games that the big teams have, with three competitions, on top of the Covid situation, makes everything more difficult. You have to talk with the players to see how they are physically, their feelings. Sometimes you have to give someone a rest to be able to have everyone in the best condition. If we count tomorrow’s game and Wednesday’s game, there are 12 games in a row, of which 11 are away from home,” Koeman said, reported Goal.

“And that’s playing at 21:00, coming home at 03:00 in the morning. It is difficult for the players to be able to play all the time. We need help. I hope that one day UEFA or La Liga will think about the number of games and what this does to the players. It is not normal. The games we’ve had to play, the trips, the schedules, playing the Supercopa between four teams, in my opinion, it is a lot.

“Each coach has his opinion about the fixture schedule that the players have to go through. I think this has to stop, it’s killing the players. We will have many injuries as a result of this. It is impossible Hopefully one day they will make a decision to help the players with their fitness,” he added.