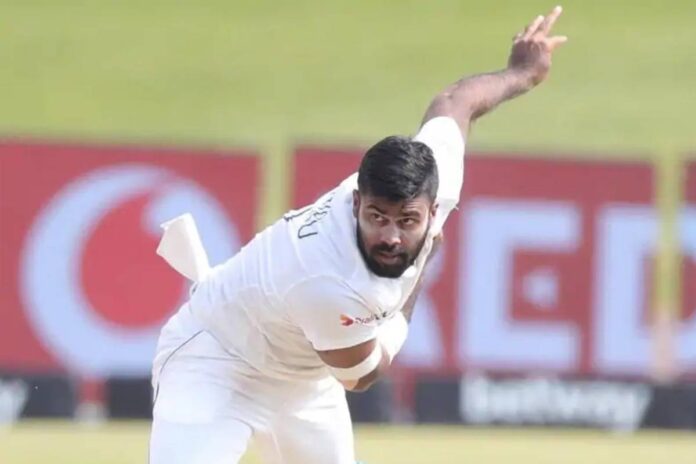 Sri Lanka’s Lahiru Kumara, who was set to feature in the team’s extended tour of West Indies, has tested positive for Covid-19 and is likely to miss the limited-overs leg of the Windies tour. Sri Lanka are set to depart to the Caribbean shortly, and Kumara is expected to stay back and recover.

Sri Lanka have been dealt a blow ahead of their tour of the Windies set to kick-off in under a fortnight’s time as pacer Lahiru Kumara has tested positive for Covid-19. Kumara, who did not feature in the England Tests and missed the second Test of the South Africa tour with injury, was expected to feature in all three formats for the Lankans in the Windies tour, but the news of him testing positive means that the 24-year-old will miss at least the limited-overs leg of the tour, having only a long-shot to make it to the Caribbean in time for the Tests. The news was confirmed by SLC via an official statement.

“He was detected during PCR Tests carried out yesterday. (21st February). Immediately upon identification, Lahiru Kumara has been directed to follow the Government’s health protocol laid out on Covid-19. Sri Lanka Cricket will continue with normal operations, adhering to the stipulated Health Protocols,” read an official release from SLC, reported Cricbuzz.

The Sri Lankan squad is expected to depart to the Caribbean imminently. The tour will kick-off with the T20Is on March 3, after which the two countries will play 3 ODIs and two Tests. The two-Test series is scheduled to commence on March 21, thus, should he recover, Kumara might have an outside chance of making it to the red-ball leg of the tour.