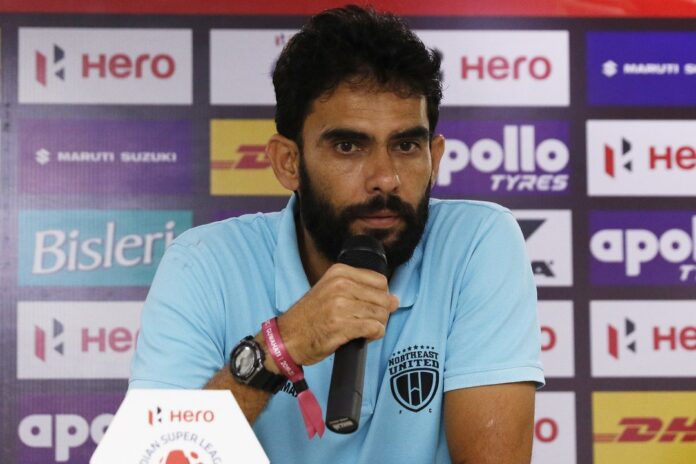 Khalid Jamil felt that the win over Odisha FC was not very easy as the score suggests, which read 3-1 by the end of the game. The ‘Highlanders’ have currently up to third place on the table, having collected 26 points from 17 matches with 6 wins and taken a step forward to qualify for the play-offs.

Northeast United FC’s turnaround has been magical and they are not done yet, having registered a thumping 3-1 win over Northeast United FC last evening, at the Tilak Maidan. With the win, not only have they climbed up to the third spot in the league table, but also set a foot in the play-offs. The mastermind – Khalid Jamil, feels that the win over Odisha FC was not very easy, as the score suggests, even though the ‘Highlanders’ were leading by three within the first 30 minutes of the game.

“I don’t think it was easy. It was a really difficult game. For us, it was important to finish the game to focus from the first to the last minute. The boys worked hard so they deserved the three points. They are a good team, all the teams are good. Both teams worked very hard. We got three goals and that’s how we won the game,” said Khalid Jamil, after the win over Odisha FC.

The ‘Juggernauts’ actually gave a run for their money towards the closing stages of the game, but Northeast United FC’s defence stood tall and kept the scores unhurt. For now, Jamil is focused on their next game, against Chennaiyin FC.

“After the first half, we were thinking about scoring another goal. We finished the game. Throughout the game, we were thinking about just winning, (not goal difference). All the remaining games are tough, especially the next game. So it will not be easy. We have to work hard to get what we want,” added the former I-League winning coach.