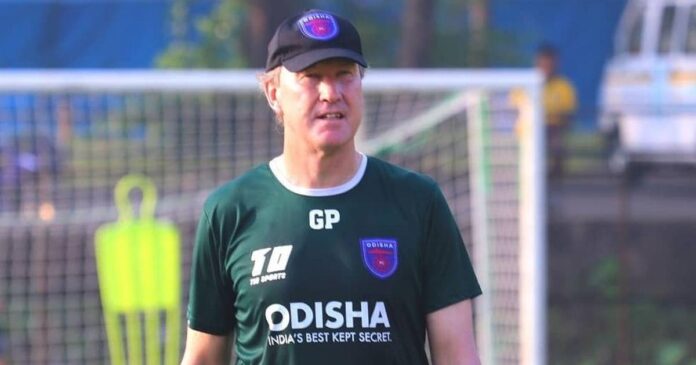 Odisha FC interim coach Gerald Peyton stated that they will keep on fighting even though they are well out of contention for the playoffs this season. The ‘Juggernauts’ are currently placed at the bottom of the league table, with just one win to their name, against Kerala Blasters FC.

Odisha FC’s Interim Head Coach Gerald Peyton has kept the atmosphere around the team very positive ahead of the next game against Kerala Blasters FC in the ongoing seventh season of the Hero Indian Super League (ISL). He has stated that the team will keep fighting and is not going to give up in the remaining games of the season.

Attending the Pre-Match Press Conference virtually, the former Arsenal Coach said, “I think it’s been a difficult season for the squad. When we started working with the entire squad, we wanted to play in a certain way and develop the team. In nearly every game, we have been in the game. At crucial times in the games, things have gone against us. In the last game, in the last 10 minutes, we didn’t carry on. Passing the ball and trying to go behind. Last 10 minutes wasn’t very good but up to the 82nd minute, we were in the game.”

Odisha FC’s only win in the season have come against Kerala Blasters and the Kalinga Warriors would definitely want to continue the good form against them on Thursday. Speaking about the opponents, Coach Gerry commented, “I think they have got some good players. We know how they play and we will match them in every area. They play a 4-4-2 and we will probably play the same. They have got good players, we are going to make it difficult for them. If you are asking me if can we beat them, yes we can do the double out of them.”

When asked about his opinion on the Indian goalkeepers, the former Ireland national team shot-stopper replied, “Arsh (Arshdeep Singh) has been our most consistent Indian player this season. He has had some very good performances. Maybe in the last game, there were a few mistakes uncharacteristic of Arsh. His overall performance till now has been very very good. I like the Bengaluru goalkeeper Gurpreet (Singh Sandhu).

“I think he is a very good goalkeeper and technically he is really good. He likes to come for crosses, his distribution is good. He is the best I have seen in India. He stands out head and shoulders above most of the goalkeepers. I think Arsh has done particularly well this season and he has looked as good as any goalkeeper in India this season.”

With five matches to go in the season, Odisha FC doesn’t want to leave any stone unturned and Coach Peyton asserted that everyone in the squad will give their best in the remaining matches.

“We will keep fighting, we will never give up even though it’s been a very demanding season and a lot of things have happened. We will continue to give everything we possibly can. The staff and players will give 100%. To all our fans, thank you for staying with us and thank you for supporting us. Even though you are a long way away, we still think about you. It’s been very tough for everybody connected with Odisha. We are focused to win games. I can promise that we will finish the season as strong as possible,” the 64-year-old coach concluded.