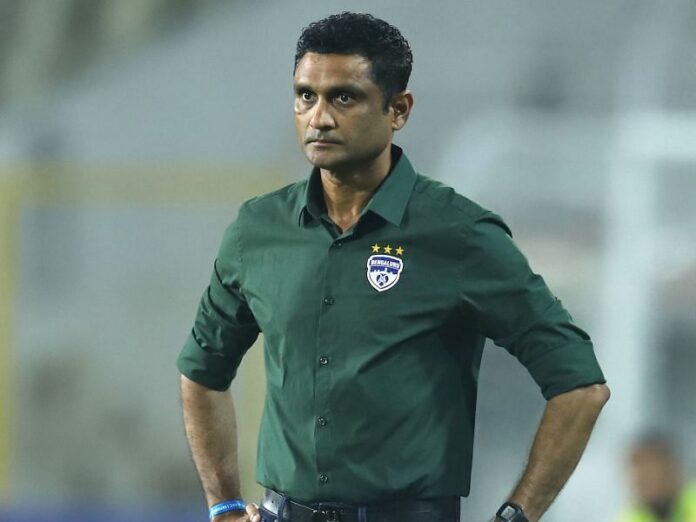 Bengaluru FC interim coach Naushad Moosa admitted that they have to be at their very best against Mumbai City FC in their upcoming match, on Monday evening at the GMC Stadium, in Bambolin. The last time these two teams met, earlier this season, with the match ending 3-1 in favour of Mumbai City FC.

Interim Coach Naushad Moosa said that he expects a difficult challenge when his Bengaluru FC take on League leaders Mumbai City FC at the GMC Stadium, in Bambolim, on Monday. While the Blues are in seventh place on the table, five points adrift of the playoff spots, Sergio Lobera’s Mumbai side lead the charts, having already qualified for the semifinal. The game could also mark a milestone moment for Bengaluru skipper Sunil Chhetri, who is in line to make his 200th appearance for the club across competitions.

“Mumbai are a good team and I am sure they will come out strong because they are fighting for the (AFC) Champions League spot with ATK Mohun Bagan. We have had a few good days of training and are expecting them to be on the offensive from the start. They have been playing well and are a consistent team who enjoy possession and move the ball around well. We will have to be at our best,” said Moosa, addressing the media on the eve of the game.

Bengaluru’s backline has faltered on occasion this season and Moosa acknowledged that his side will have to stay focused for the duration of Monday’s encounter if they are to claim any points against Mumbai. “We did really well against ATK Mohun Bagan in the first 35 minutes, kept the ball well and managed to stay compact. But once we conceded, we started losing momentum. We need to remain cautious and compact for the whole game on Monday. We will look for opportunities to score, especially on the counter-attack, but we have to do so while staying tight at the back.”

With the League having reached its business end, many teams still remain in mathematical contention for the playoffs, and Moosa said his players will give their all to take maximum points from the games that remain. “The results (of other teams) have been in everyone’s favour, not just for us. It is important for us to stay focused and stay positive while playing good football. We want to get as many points on the board as we can from these three games.”

The Blues will continue to miss the services of Rahul Bheke, who has joined Juan Gonzalez on the sidelines with an injury, while Pratik Chaudhari will serve a suspension after picking up his fourth yellow card of the season. The Islanders, on the other hand, will be without influential midfielder Hugo Boumous, who picked up his fourth yellow card of the season in the encounter against FC Goa, but Moosa believes that the hosts have enough quality in their sides to fill in the Frenchman’s shoes.

“Boumous will be a big miss for Mumbai, but they have quality in their ranks to replace him on the pitch. They have a good set of players in Cy Goddard, Ahmed Jahouh, Rowllin Borges, who can step into his shoes. Even in front they have good options in Adam Le Fondre and Ogbeche. We will have to stay focused if we are to take anything away from this game,” Moosa added.