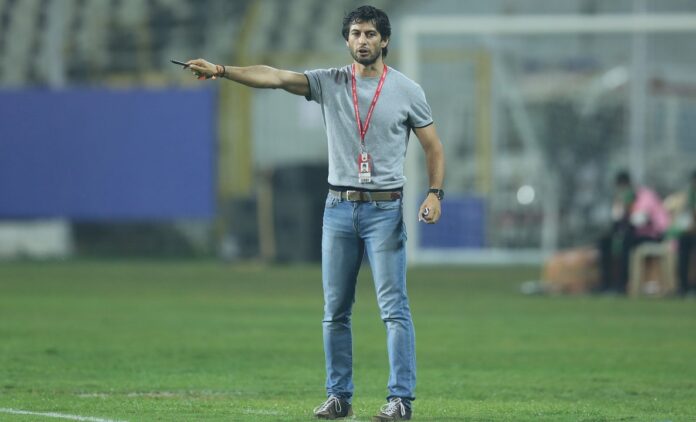 FC Goa head coach Juan Ferrando feels that they should keep on improving, especially in their defence, with them setting eyes on a top-four finish this season. The Gaurs are scheduled to play their last game in the league stage against Hyderabad FC next weekend, at the Fatorda Stadium.

FC Goa were aiming for nothing less than a win when they locked horns with Bengaluru FC, last Sunday evening. Two early strikes from Igor Angulo and Redeem Tlang were enough for them to script a well-deserved victory for the ‘Gaurs’ and inched closer to a top-four finish in the ongoing season of the Indian Super League. In spite of the win, FC Goa head coach Juan Ferrando feels that they should keep on improving, especially in their defence.

“My focus is on our team all the time. Now our target is to focus on our game next Sunday against Hyderabad. It’s difficult for everybody. After 19 games, it’s normal that we learn about the high press. It’s necessary to continue to improve because sometimes we have problems in defence,” said Juan Ferrando, during the post-match press conference.

Indian winger Redeem Tlang scored his first goal in just his second start for the ‘Gaurs’ this season. The manager was pleased with the way he played throughout the game and wants him to continue the same work. Meanwhile, Ferrando also gave an update on the injury of Jorge Ortiz.

“He (Tlang) is working on the pitch and today he got an opportunity. I’m happy for him, for his job, his goal and now it’s important [for the team] to continue in the same line,” added the manager.

“This morning I was talking to him (Ortiz) and the medical staff. In the end, we decided that it’s better to protect him. I’m sure, with good recovery, he will be ready for the next games.”