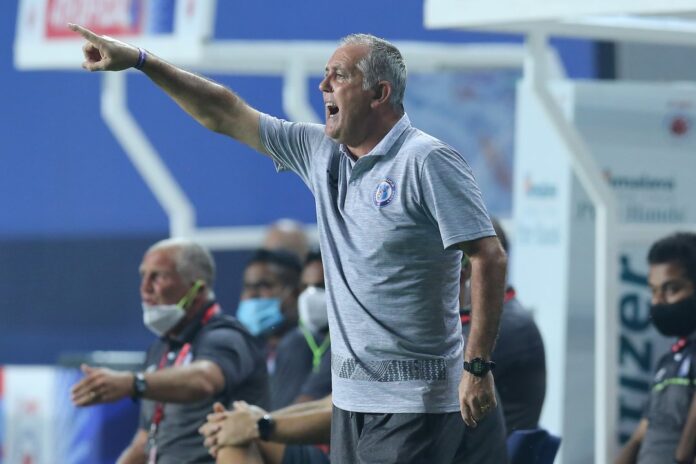 Jamshedpur FC head coach Owen Coyle admitted that they gifted away the game to ATK-Mohun Bagan last evening at the Fatorda Stadium. With the loss, The ‘red miners’ are now placed at the sixth position on the league table, having collected 21 points from 18 matches so far in this season.

The only way for Jamshedpur FC to keep their hopes alive was to win their remaining three matches and hope that the other results favour their fortunes. But, as it happened, they faltered in front of second-placed ATK-Mohun Bagan and crashed out of the title race following the 0-1 loss. Star striker Roy Krishna scored the only goal of the match. Their head coach Owen Coyle admitted that they gifted away the game to ATK-Mohun Bagan.

“It was never a fair result. Their goalkeeper (Arindam Bhattacharya) made a save which was probably the save of the season. At 0-0, for Valskis to score, we could have won the game. In the second half, I don’t think ATK Mohun Bagan had a shot on target in the second half. We have made a mistake in giving the ball away and it resulted in a goal. It is certainly far from being a fair result,” said Owen Coyle, during the post-match press conference.

“They are a good side and win games but today we gifted the game. We had the possession then gave the ball away, then their keeper made an unbelievable save. They have won the game and good luck to them but nobody can say they were not deserving of the three points in terms of their performance of the game,” added the manager.

In spite of finding themselves in dire straits, the Jamshedpur FC boss is not losing hope, stating that they will try to win their remaining couple of games and hope for the best. Coyle’s men are set to face league leaders Mumbai City FC in their upcoming match this weekend.

“I certainly intended to try and win the three games but we are still in it. We are three points behind but obviously, those teams have a game in hand. We just have to win our final two games and see where it takes us. We are not giving up,” said Coyle.