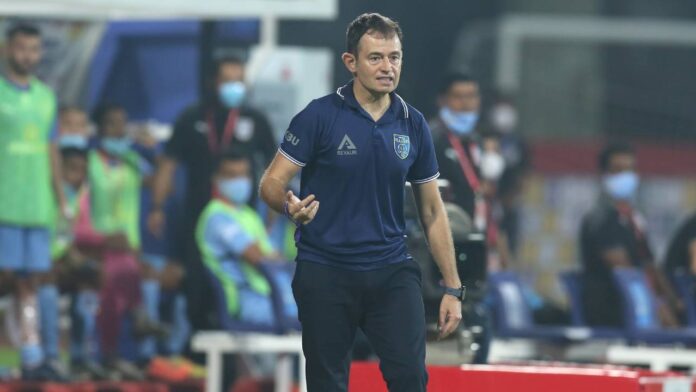 Kerala Blasters FC head coach Kibu Vicuna is targeting to collect twelve points from the four matches remaining in their quota to give their best shot for a top-four finish this season. The Tuskers are placed at the 10th position in the league table, having collected just 15 points from 16 matches.

Kerala Blasters FC’s season has been disappointing this season, with inconsistency having the better of them even though they have enjoyed a few good patches here and there. As far as things stand at the moment, the Tuskers are placed at the 10th position on the league table, with very slim chances of them making it to the play-offs. But their head coach Kibu Vicuna is targeting to collect twelve points from their remaining matches to keep their distant hopes alive in the ongoing season.

“Our objective is to get 12 points (from the remaining four games). We go match-by-match. Tomorrow, we have a challenge. We are treating the match very seriously, it is a good opportunity to get points and be close to the teams that are better than us in the league. If we get the points, everything is possible. We are not going to give up. We are going to get the best possible position,” said the Kerala Blasters FC head coach, ahead of their game against Odisha FC, this Thursday evening.

Their previous couple of matches were close shaves, ending up on the losing side on both occasions with a one-goal deficit. Kibu Vicuna agreed that created chances and was better than their opponents in certain patches in the above-mentioned games, adding that they have the potential to defeat the best in the business.

“We are competing very well. We were better than the opponents in some parts of the games. We could win both games. We are creating chances. We saw that we can get the points against any team,” added the manager.

“No question that those two teams (ATK-Mohun Bagan and Mumbai City FC) are having a very good season. But we have seen that teams can get the points against them. It is also true that they are more consistent than other teams and that is why there is a difference of points. I think this league is very even, this is the good point of the Indian [Super] League that there is no difference between teams.”