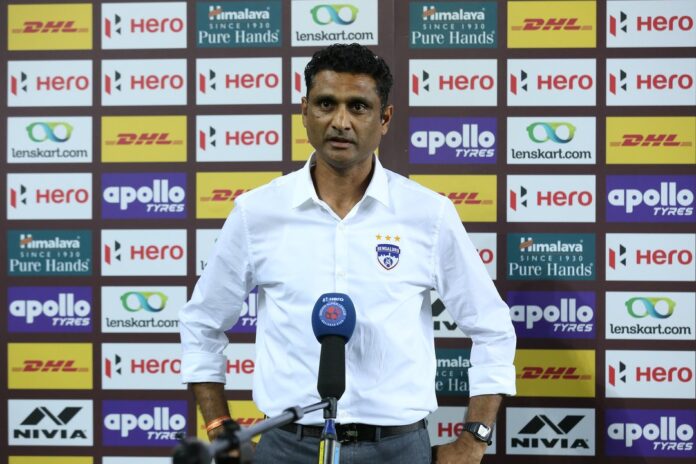 Bengaluru FC interim head coach Naushad Moosa feels that they need to continue playing the way did against Mumbai City FC to win the remaining matches and keep their hopes alive for a top-four finish. With the win, the Blues climbed up to the 6th position on the table, with 22 points from 18 games.

Bengaluru FC is having the worst season of their short yet but glorious history, with long-standing coach Carles Cuadrat being sacked midway through the season, while Naushad Moosa was appointed as the interim manager. The Indian managed to win only one game before taking the field against leaders Mumbai City FC, last evening.

Surprisingly, the Blues played arguably the best game this season, having staged an unexpected upset to claim three points with a 4-2 margin against the ‘Islanders.’ Naushad Moosa feels that they need to continue playing the same way to win the remaining matches and keep their hopes alive for a top-four finish.

“It was very important for the team [to win]. The only way to win the remaining matches is to play as a team like we did against Mumbai City,” said Naushad Moosa, during the post-match press conference.

Indian legend Sunil Chhetri was playing his 200th match for Bengaluru FC and all eyes were on him, and he did not disappoint. Having scored the brace, the striker ensured that Mumbai City FC left the field with empty hands. Moosa was all in praise of the Indian skipper and lauded the way he motivates other players on the field.

“Sunil is a captain and a leader. The way he motivates the players is very important. You can see the frustration in him when the team isn’t playing so it was important for him to keep his cool,” added the interim coach.