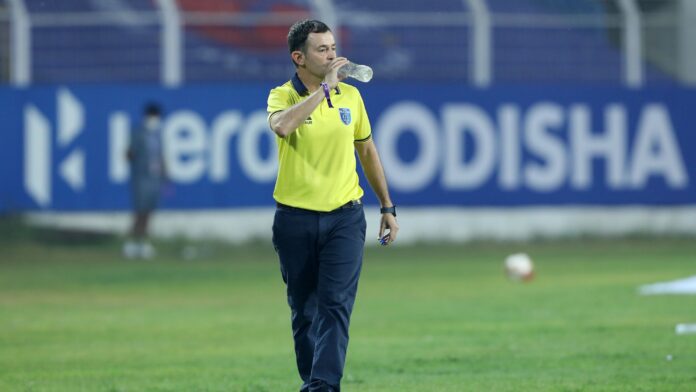 Kerala Blasters FC have parted ways with their head coach Kibu Vicuna after their shambolic 0-4 loss to Hyderabad FC on Tuesday evening, at the Tilak Maidan. The Tuskers roped in the Spaniard prior to the start of the season, after he guided Mohun Bagan to their second-ever I-League title.

As per the mathematical calculations, Kerala Blasters FC had the slimmest chance of making it to the play-offs, with their heavily dependent on other fixtures. But, a disappointing display in the second half against Hyderabad FC not only denied them points but piled on humiliation. The 0-4 loss was enough for management to sack their head coach Kibu Vicuna, who ended his tenure at Kerala Blasters FC with just three wins in 18 matches.

“If you see only the results then we lost 4-0. We had the best two chances in the second half. One by Prasanth (Karuthadathkuni) and second by Gary (Hooper). I think the match was very even. We are training in the training ground and training well. But we are not getting the result from the training,” said Kibu Vicuna, during the post-match press conference.

The Spaniard was roped in prior to the start of the ongoing league, after his predecessor Eelco Schattorie failed to deliver the desired results the previous season. Vicuna’s claim to fame moment came when he guided Mohun Bagan to their second I-League title last season, which caught the attention of the Kerala Blasters FC management.

Kerala Blasters FC defence was the worst in the entire league, with them letting in 33 goals in 18 matches – the most by any team. As per the league standings, the ‘Tuskers’ find themselves at the 10th position, with just 16 points to their name, with just three wins to their name. With Kibu Vicuna’s post vacant, the Blasters are yet to announce a replacement for the same.