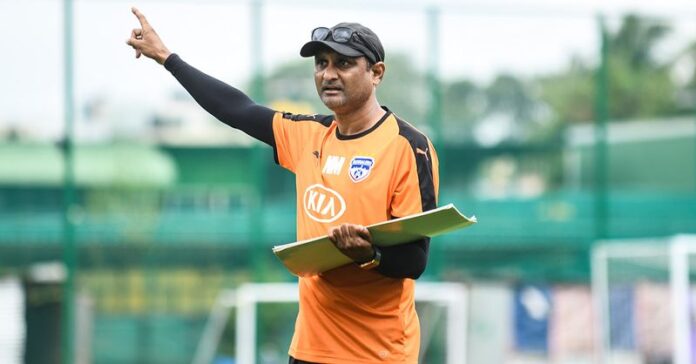 Bengaluru FC’s miserable season could have been rescued only if they had shown intent in their remaining matches, but that has not been the case so far. Even though it was obvious that that the game against defending champions ATK-Mohun Bagan wouldn’t be a cakewalk, but the manner in which they lost was not acceptable for any of their well wishers. Their interim coach Naushad Moosa feels that giving away the penalty in the 37th minute of the game was the turning of the game, which they eventually lost 0-2.

“The way we started the game, we were really doing well till the water break. Then that penalty happened and the players lost the motivation and then you can see the frustrations, giving unnecessary fouls. We could have controlled that,” said Naushad Moosa, during the post-match press conference.

With the Blues set to play against league leaders Mumbai City FC next week, Naushad Moosa and his men will have their work cut out. But, Moosa is adamant to use the 6-day gap to their best possible use, especially with one of their main players – Rahul Bheke out with an injury.

“We have a week’s break now. We are playing close games. So we need to get good rest and think about the Mumbai City game. Rahul’s (Bheke) injury, I guess it is serious and we have to sit and think about it,” added the manager.

point of the game against ATK-Mohun Bagan last evening. The Blues find themselves at the sixth position in the league table, having collected just 19 points from 17 matches so far.