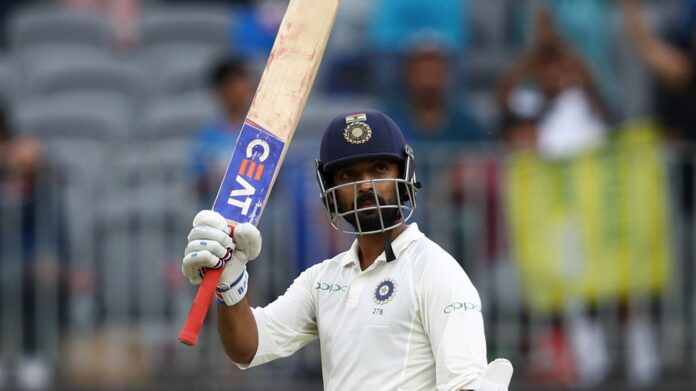 George Bailey led Australia in the curtain raiser of the 2015 World Cup, scored 55 and captained the side to victory. He was then booted out of the team from match two because he did not warrant a place as a batsman. Rahane is far from being a Bailey, but sport is unpredictable, isn’t it?

Indeed, sport is unpredictable. At least Test Cricket is. When fans on Social Media took turns in abusing the pitch curator for the first Test in Chennai, V Ramesh Kumar, they were not expecting the wicket to extract a result with two sessions to spare. England, themselves, when they opted to bat into Day 3, did not see an Indian collapse coming, and the fear of being out-batted was what pushed them to carry on for 190 overs.

As it turned out, though, England had in fact ended up overestimating their opponents. Only three Indian batsmen in the first innings managed to score more than 35 and half the side batted like they couldn’t be bothered to hang around. Of the six sides that were playing in the subcontinent simultaneously, India’s batting effort in the first innings turned out to be the worst, with them showing the resilience of an air balloon against a hydraulic press. India’s effort on Day 3, in short, was a collective batting disaster, the upshot of which was the side going on to lose its second ever Test at home in 8 years.

But no matter how collective the failure is, a team sport isn’t a team sport until there are scapegoats singled out for defeats. That is an unspoken rule. And the unlucky scapegoat for India’s defeat in Chennai, it turned out, was Ajinkya Rahane.

Rahane accumulated a total of 1 run across two innings – Shahbaz Nadeem was the only other batsman to accumulate fewer runs – and twice got out in the most village fashion imaginable. In the first innings he chucked a rank full-toss straight to short cover and in the second he hit his pad with his bat to enable Anderson to bowl him through the gate. Nine balls was what he lasted in the entire game and so bad was his showing that fans who 10 days ago wanted him to be appointed full-time Test captain unironically wanted him dumped from the side.

Indeed, “Drop Rahane” takes the cake for being the most knee-jerky, reactionary and preposterous suggestion of the week, but playing Devil’s Advocate, there is fair reasoning behind why fans, in general, tend to make Rahane the scapegoat for abject performances at home.

There are a fair few cricketers who look like Bradman at home and Chris Martin away but Rahane is an outlier; away from home he averages 7 more than what he does in India. It is one of the reasons why commentators seldom pass the opportunity to point out how Rahane is “one of the rare subcontinent batsman who averages more away than at home”. This should technically be a matter of pride for any batsman but in Rahane’s case, his away record receives the hype because he is an average-at-best batsman at home.

On the back of his accumulated score of 1 in Chennai, Rahane’s average in India dropped to 37.35, which is conveniently the worst amongst all the other Indian batsmen in both the line-up and the squad. Ravichandran Ashwin (28.60) is the only other ‘batsman’  to boast of a lower average in home conditions. So considering this, you could understand why frustration mounted within fans when his stumps cartwheeled 30 minutes before lunch on the final day, and why he was made the scapegoat, though this particular dismissal had less to do with his own shortcomings and more to do with the brilliance of Anderson.

The two dismissals in Chennai were just the triggering point of frustration that has existed within fans for 8 years now, ever since Rahane made his Test debut. He’s always had the ability but never the consistency – only twice across the last 6 home seasons has he ended a calendar year with an average north of 45. Usually, he justifies his selection by scoring heavily outside the subcontinent.

A marvellous 2015 and 2016 threatened to put an end to it but he was back in his not-so-merry ways in 2017, where he averaged 25.00. In fact, 31.17 is what he is averaging in his last 20 Tests at home, having struck a solitary ton. These are poor numbers by anyone’s standards, but for an Indian number 5? That too at home? Unacceptable, you could say.

Any player with such ‘unacceptable’ numbers generally gets dropped, but the trade-off with Rahane is that he tends to score, at least at times, tough and crucial runs. In just the fifth home Test of his career, he scored twin hundreds against South Africa in Delhi in a game which saw only two other 50+ scores in the entire match; Two Tests later he scored an invaluable 77 against New Zealand walking in at 46/3 on a tricky morning at the Eden Gardens; and, most notably, in 2017, batting alongside Pujara, he scored a series-defining 52 in Bengaluru against Australia in what could be described as the most important Test for India in the last half a decade. These are knocks that prove that he can bat.

That he is a ‘bad’ player of spin is also a myth. He averages over 44 against both leg-spinners and off-spinners and a healthy 39.7 versus left-arm spinners. He has over 20 first-class hundreds in India and, prior to making his Test debut,  was one of the finest young batsmen against spin bowling.

So what has gone wrong in his Test career then? Why has he never been able to replicate his domestic exploits? Whether it’s a pure psychological block or if he made any technical adjustments that deterred his ability to score freely on slower sub-continent tracks, no one quite knows. But it is clear that Rahane struggles to score big at home. To put his struggles to score ‘big’ in perspective, in just 3 Tests Rishabh Pant almost has the same number of 90+ scores (3) as Rahane (4) in India.

He not only has struggled to be consistent, he has also failed to make it count when he’s been in good nick. Remarkably, across 8 years, 11 times is all Rahane has passed fifty in India. Only 4 times out of the eleven he’s reached three figures – only one score of 130 or more in that – and only 8 times he has even managed to pass 60. Some may argue that this is largely due to the ridiculously strong Top 4 that has batted above him, which is true to an extent, but that Ravindra Jadeja has only 1 fewer fifty-plus score in India than Rahane in the same number of innings at a far superior strike rate, often batting two positions below, debunks this theory.

This table, in many ways, illustrates how poor a batsman Rahane has been in India. Since January 1, 2010, almost every Indian batsman – and a fair few foreigners, including Darren Bravo – who has at least scored 500 runs in India has boasted an average far superior to that of Rahane’s. Wriddhiman Saha, Gautam Gambhir and Ravichandran Ashwin are the only other Indians to have an average lower than Rahane’s 37.35 at home since the turn of the previous decade and two of them are not specialist batsmen.

To be fair to Rahane, though, he did improve his numbers in the previous home season. In 2019, albeit against weak South African and Bangladesh sides, he accumulated 353 across 6 innings and passed fifty 4 times. But there, too, he did not go big as you’d expect a No.5 batsman in India to. Only once he passed the three-figure mark and that, too, came to a halt at 115. Twice he was dismissed in the fifties and once in the 80s; these are good returns but, on flat wickets, will only work if there is another batsman who’s already scored a daddy hundred.

Going forward, this will be the single biggest challenge lying ahead of Rahane – does he have it in him to go big? Not 80 big or 125 big, but 175 big. 223 big. Because the time might come when he has to. In fact, it already might have arrived. With the introduction of a new-ish opening pair in the form of Shubman Gill and Rohit Sharma, and of course the addition of Pant, the Indian batting is in the midst of mini-transition of sorts. Rahane, Kohli and Pujara are, really, the nucleus of the side.

Why it’ll be imperative for Rahane to start scoring big is because of the indifferent form of both the other two senior men. Between 2016 and 2018, daddy hundreds – and double tons – scored by Kohli and Pujara gave Rahane the leeway to not be prolific – his lack of runs had no real effect on the eventual outcome. But with Kohli having scored just 1 ton in his last 12 Test matches, and with Pujara having scored no tons at home in three-and-a-half years, Rahane no longer has the luxury to leech off the brilliance of those above him.

All of Pujara, Rohit and Kohli are at some point destined to go through lean patches in home conditions but, unlike Rahane, they have enough credits in their bank to even go extended periods without a meaningful contribution. Not that they will, but why in such a scenario they will be better-placed than Rahane is because of their exploits over the years. Rahane was given a pass when he failed to make it count when the batsmen above him flourished but it is hard to see him get the same treatment, at least from fans, should he, like he did in Chennai, not stand up when the chips are down.

So, the ball is in Rahane’s court. It is hard to imagine him becoming a George Bailey, but, then again, sport is unpredictable, isn’t it?