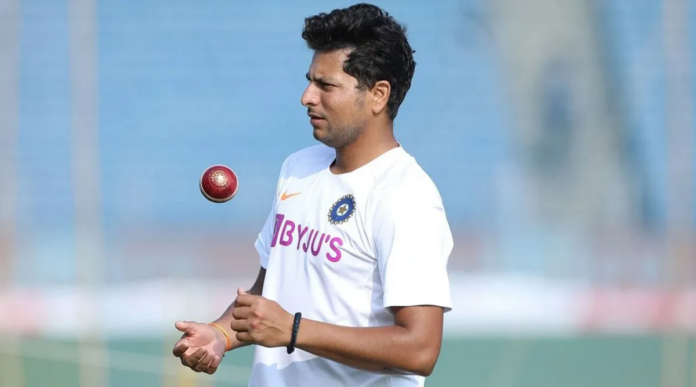 Kuldeep Yadav has stated that he was happy being a part of the side when the team was performing well but admitted that there was some pressure not playing a Test for two years. Kuldeep further added that the team wasn’t worried after losing the first Test as they knew they could comeback.

India registered a comprehensive victory against England in Chennai to square the series going to the Ahmedabad leg of the series, but this became even sweeter for Kuldeep Yadav, who picked up a couple of wickets late in the innings. In the entire Test, Kuldeep bowled only 12.5 overs and majorly acted as a holding bowler to Ravichandran Ashwin and Axar Patel.

However, Kuldeep doesn’t have any regrets and stated that it is important for him to stay along with the team when it’s playing well and he believed his time would come. In the meantime, he was discussing the technicalities with Ravichandran Ashwin and how he could better himself as a red-ball bowler.

“It was important to stay along with the team when it’s playing well. My job was to keep control, contain runs from one end, and chip in as one of the three spinners on this track. We have been planning for this series for a long time, right from the Australia series. There was some pressure (on himself), having not played a lot of Tests in the last two years. Was discussing a lot with Ashwin regarding bowling in the right areas and putting the pressure on the batsmen,” Kuldeep said in the post-match presentation.

India have been an unstoppable force at home in the last one decade with only one loss in their previous 36 games before the juggernaut stopped in Chennai by England. It must have been an eye-opener but Kuldeep revealed that the side was not lost on confidence after the opening game as they believed they could bounce back.

“We weren’t worried (on losing the first Test), we have been in such situations before, in my first series (in 2017), we had lost the first Test against Australia in Pune. We’re relaxed, we knew we had the team to come back and perform. Everyone was just focused on doing well in this Test,” Kuldeep added.